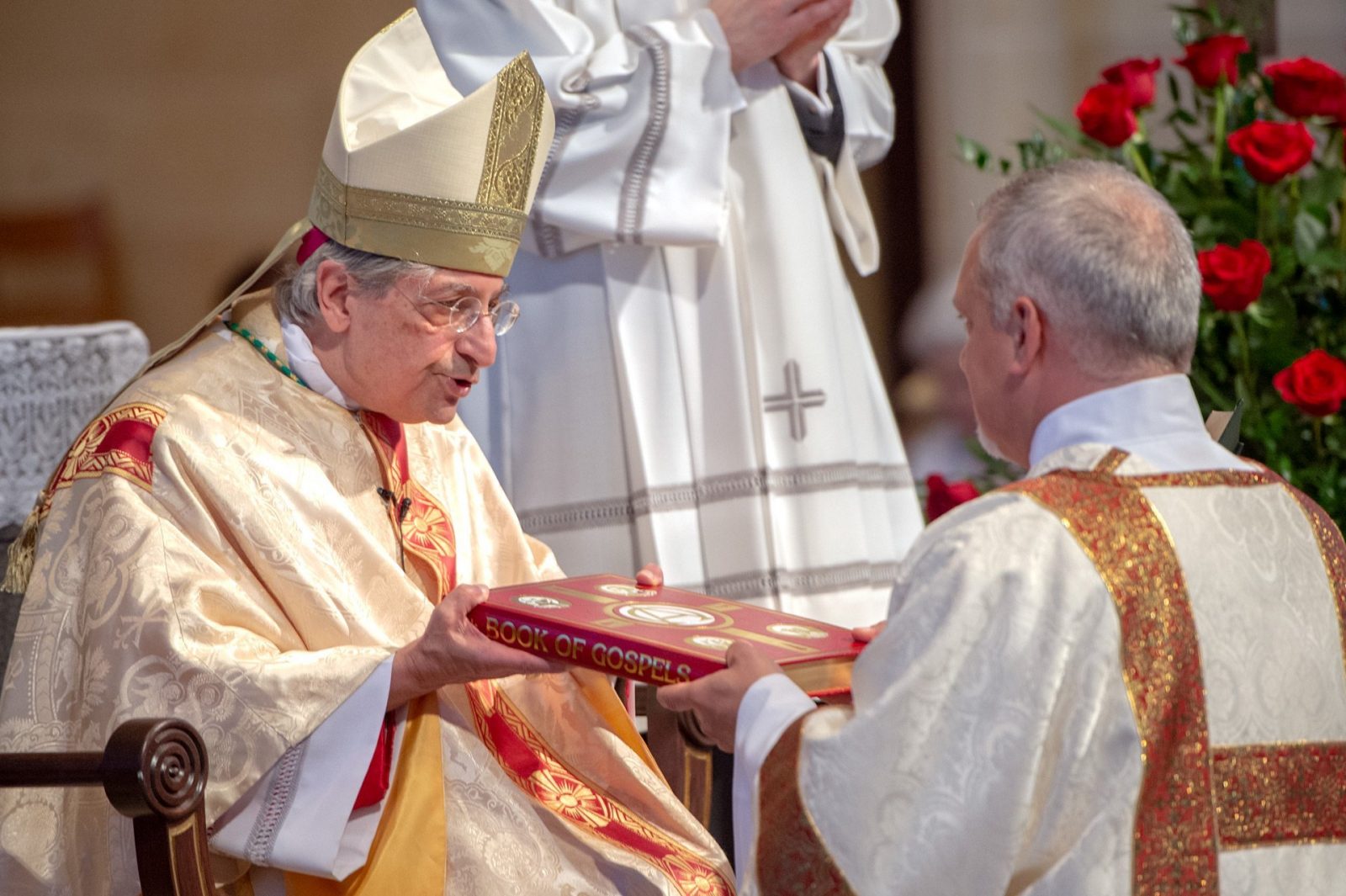 The four men soon to become deacons in the Rochester Diocese have notably diverse backgrounds, yet they all share a deep desire to serve the church.

That commonality will be celebrated Saturday, May 25, when Bishop Salvatore R. Matano is scheduled to ordain three men to the permanent diaconate and one transitional deacon who is on the path to priesthood. The ordination Mass will begin at 10 a.m. at Rochester’s Sacred Heart Cathedral.

Roger DeBell knew that, in his busy role as an elementary-school principal, pursuing the permanent diaconate would require good time management.

However, “All the deacons I know have professional responsibilities as well,” he said. “They encouraged me into discernment and also made very clear, ‘You will find the time if it’s truly what you desire.’ What they told me is true.”

DeBell, who will turn 52 on June 15, is a graduate of Red Jacket High School in Shortsville. He earned a bachelor’s degree in music education from Nazareth College and a master’s in education from SUNY Brockport, and after several years of teaching obtained his administrative certification from SUNY Brockport. For the past nine years he has been principal at Thornell Road School in Pittsford. DeBell and his wife, Jody, have two grown sons and are parishioners at Pittsford’s Church of the Transfiguration.

For his diaconal field assignments, DeBell served at the Monroe County Jail, St. Ann’s Home and St Joseph Parish in Penfield. He and his two permanent deacon classmates completed formation studies at St. Bernard’s School of Theology and Ministry.

DeBell said that as a deacon, he’s eager to be placed “where I might be of the greatest service to the church.”

“I really trust that the (Holy) Spirit will guide me where I need to go,” he said.

Bill Goodman recalled shrugging comments off when he was told he’d make a good deacon due to his penchant for service and volunteerism. Then, at Mass one Sunday, “It just came to me that I needed to pursue the diaconate. I was like, ‘Where did that come from?’” said Goodman, 50. Despite initial concerns about committing to formation, “I would always come back to this feeling of peace that it’ll all work out,” he added.

Goodman graduated from Rochester’s Aquinas Institute. He spent three years in the U.S. Army as a specialist, logging most of his service time at Fort Polk, La., and later serving in Saudi Arabia. He and his wife, Sheila, belong to St. Luke the Evangelist Parish in Livingston County and have two grown sons. He became an elevator apprentice in 2005 and journeyman mechanic in 2009, and is currently working for Thyssen Krupp Elevator.

Regarding his pending ordination as a permanent deacon, he said, “I’m excited about it and wondering what the next chapter holds, what God has in store for me.” As part of his diaconal ministry, he said he hopes to assist people who, like himself, are recovering alcoholics.

Jonathan Schott has been in ministry pretty much his entire professional life, so he considers his ordination to the permanent diaconate to be a natural progression.

Schott, 38, is a graduate of East Rochester High School. He went on to St. John Fisher College, where he earned his bachelor’s degree in history in 2002. He also received the sacrament of confirmation while at St. John Fisher.

He served as associate director of Christian formation at Pittsford’s Church of the Transfiguration from 2004-08. Schott then worked as diocesan coordinator of catechetical services from 2008-15, earning his master’s degree in theological studies from St. Bernard’s School of Theology and Ministry in 2010. He returned to St. Bernard’s from 2015-16 as director of recruitment, admissions, financial aid and alumni relations. Since December 2016, he has served as assistant director of campus ministry at St. John Fisher.

Schott and his wife, Jodi, have three children ages 3, 5 and 7. They belong to Irondequoit’s St. Kateri Tekakwitha Parish, where Schott performed one of his field assignments. The others were at St. Ann’s Community and Bethany House, a shelter for women and children.

“My formative journey has been simply amazing,” Schott remarked. “It’s a gift I can never repay the church for or repay God for. From the beginning, this has always felt right.”

Joseph Martuscello is this year’s lone transitional deacon for the Rochester Diocese, with his priestly ordination currently scheduled for the spring of 2020.

Martuscello, 27, is a native of Ss. Isidore and Maria Torribia Parish in central Steuben County. He attended Corning East High School where he was a midfielder on two state-finalist lacrosse teams, serving as captain his senior year. He then attended Corning Community College and Franciscan University of Steubenville, earning a bachelor’s degree in philosophy from Steubenville in 2015.

In the fall of 2015, Martuscello began studies for the diocesan priesthood at St. John’s Seminary near Boston. He will return to St. John’s this coming fall for his final theology year. Over the past three summers in this diocese, Martuscello did a cultural immersion in several ministries (2016), assisted at St. Mary Our Mother Parish in Horseheads (2017) and took part in clinical pastoral education at Strong Memorial Hospital (2018).

Regarding all the formation steps leading up to this point, Martuscello remarked, “I think I’ve grown in many areas, and I think that these experiences have only helped me to become a better man and be formed as God’s servant.”

“There’s a joy,” he added, “in knowing the peace that comes from taking up the call from Christ and following it. It’s awesome.”