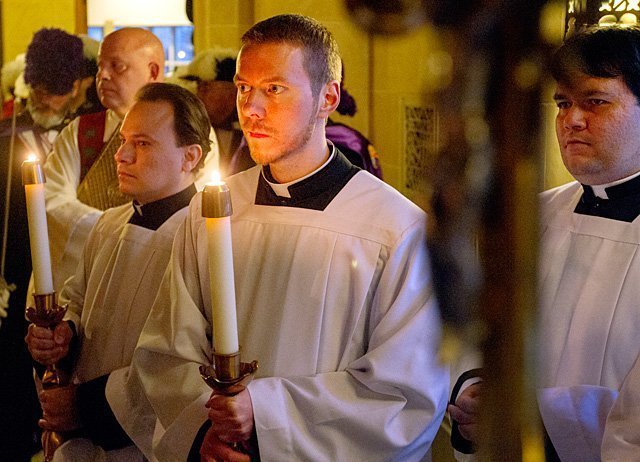 Seminarians Camilo Aguilar (from left), Justin Miller and Jorge Ivan Ramírez wait to process in from the back of Sacred Heart Cathedral during April 2014 Chrism Mass.

Divergent paths led to ministry for four men being ordained as deacons next month, and three of them will continue on journeys toward priestly ordination.

Two of the three men in priestly formation came to Rochester through a collaboration established in 2009 between the dioceses of Rochester and of Medellin, Colombia.

When Viloria learned of the opportunity to become a priest in Rochester, he decided to act on it because his country was blessed with many vocations, he said. But when he arrived here, the language barrier was a huge hurdle to overcome since he knew only a few basic phrases, he said.

Living here not only required acquiring new language skills but learning a new culture, he noted. In many parts of South America, Americans are viewed as unfriendly people who are not spiritual and are focused on making money. He soon learned how incorrect those assumptions are, said Viloria, 33.

He was especially impressed by people who publicly say they are Catholic, which was unique for Viloria, who comes from a country where people don’t have to distinguish themselves as such because its citizens are predominantly Catholic, he said.

He said he had attended Mass almost daily during his childhood, and often thought about being like the priest on the altar. He considered the idea again when he met another priest in his later teen years, but his parents couldn’t afford to send him to seminary. So Viloria said he worked in a factory and a clothing store, until a local bishop connected him with a benefactor who paid for him to attend seminary and obtain his theology degree from Colombia’s Catholic University in Medellin.

He moved to Rochester to complete his seminary formation in 2012 and began his pastoral year at Rochester’s Peace of Christ Parish later that same year. He is now in his fourth year at Theological College in Washington, D.C., and may be ordained to the priesthood as early as this fall.

Ramírez, 34, said his call to the priesthood came at an early age, and he began seminary studies at the age of 13 in his native Medellin. During the course of his formation process he took a giant leap of faith, joining Sergio Chávez as the first of two seminarians to participate in the collaboration between the Rochester and Medellin dioceses. Father Chávez was ordained a priest of the Rochester Diocese last year.

Ramírez said he has noticed some differences between the priestly formation process in the U.S. and in his native country, but noted that the foundation is the same: The church is "one" as Catholics profess in the creed.

Before completing his final year of seminary this fall at St. Mary’s Seminary and University in Baltimore, he plans to spend time in Colombia to celebrate his diaconal ordination with family members, including his two brothers, who won’t be able to make the trip to Rochester. An aunt and a few cousins are planning to attend, he said.

Ramírez said he is feeling nervous about his ordination, as he has always compared the pomp and circumstance of an ordination ceremony to that of a wedding. But he said he also is grateful and happy that the diocese and Bishop Matano have found him worthy of ordination.

Although he was raised as a Catholic, Miller, originally from Springville, N.Y., experienced a conversion while studying at St. John Fisher College and really started living out his faith.

He said he felt a call from God during his sophomore year and went on a discernment retreat, but decided that marriage was more for him, he said. He graduated from Fisher in 2007 with a degree in English and religious studies, and went to work at Paychex. But a year and a half later, the call to the priesthood became stronger and, through discussions with friends, he discerned that he wanted to be priest, Miller explained.

The lack of vocations at that time had really struck him, he said. So, in the fall of 2010, he entered Becket Hall, the diocesan residential program for those discerning priestly vocations, and worked at St. Jerome Parish in East Rochester before entering seminary at Theological College the following year.

Miller, 29, spent his pastoral year at Our Lady of Peace Parish in Geneva. During that time, he said he helped revive the Catholic campus office at Hobart and William Smith Colleges and even brought students to the cathedral for a retreat.

As his ordination nears, Miller said he is feeling a sense of anticipation, eagerness and gratitude. He looks forward to the gift of being a deacon and being able to preach and baptize and do what God "called in my heart."

The call to serve others likewise hit Cuestas strongly during his college years attending Benedictine College in Kansas, even though the native of Albuquerque, N.M., said he felt "it since day one."

He went on to earn a master’s degree in finance from the University of Dallas and entered the business world after graduation. Cuestas said he suppressed the call to service, but said it remained with him as he moved to Rochester, initially working for General Electric and now for Xerox Corp. as cash operations leader for several global sites.

Now that his children are a little older, they and his wife encouraged him to pursue the permanent diaconate program, he said, as did friends at his parish, St. Joseph in Penfield.

Those affirmations echoed what he had heard at other parishes, which made Cuestas realize that a call to service also comes from one’s community.

But one of the biggest signs arrived in a Catholic Courier article a few years ago about Deacon Albro Wilson’s jubilee of diaconal ordination. Cuestas noticed that Deacon Wilson, too, had worked for General Electric and Xerox. Amid his personal discernment process, Cuestas felt he was making the right choice in following in Deacon Wilson’s footsteps.

He said the diaconate formation has been wonderful, and that he is both nervous and excited to be ordained a permanent deacon and get to know the seminarians being ordained with him.

With the prayers of the local diocesan community and of his family — half of New Mexico will attend the ordination, he joked — Cuestas said he is excited to be fulfilling his destiny to do God’s work.