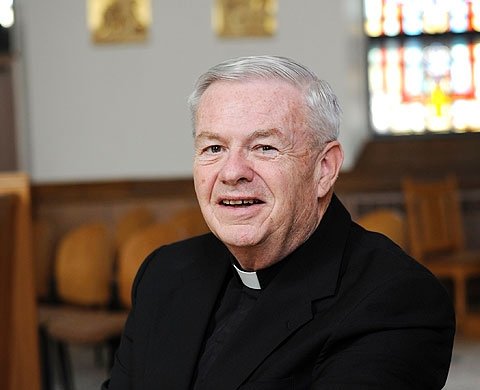 Father Lewis Brown will retire from active ministry at the end of June after 45 years of priestly ministry. A longtime U.S. Navy chaplain, Father Brown spent nearly half of his priestly career ministering to Navy sailors and aviators well outside the boundaries of the Diocese of Rochester.

"I’ve served ashore and on, above, below and over seas," Father Brown said.

He did not always plan to be a Navy chaplain. An Elmira native, he grew up in St. Mary Southside Parish, where he attended the parish’s grammar school. After graduating from Notre Dame High School in Elmira, he went on to St. Andrew’s and St. Bernard’s seminaries and was ordained June 3, 1967, by Bishop Fulton J. Sheen at Sacred Heart Cathedral in Rochester.

His first few assignments were squarely on land. He was associate pastor at Church of the Assumption Parish in Fairport (1967-70); St. Alphonsus Parish in Auburn (1970-72); and St. Ann Parish in Hornell (1972-77), where he had interviewed children about faith-based topics and played children’s music for a regular local radio show called "Sunday School." In 1977 he became director of the diocesan religious-education office, and after serving in that capacity for four years, he became associate pastor at Immaculate Conception Parish in Ithaca. He stayed there until 1985.

He recalled that while serving at Immaculate Conception he received a phone call from a Navy recruiter who asked if he’d like to become a chaplain for the U.S. Navy. After receiving permission from Bishop Matthew H. Clark, he embarked on a vocational path that would take him to Okinawa, Japan and many other places around the globe. He spent time on Naval bases and on aircraft carriers and submarines, and served for several years as the Catholic chaplain at Arlington National Cemetery in Virginia.

What Father Brown discovered during his 22 years of active duty was that military chaplaincy is not all that different from parish ministry after all.

"It’s really bringing pastoral care to the people, and the Navy is just a very different context you’re in," he said.

After retiring from active duty in 2007, Father Brown took a sabbatical at St. Patrick’s Seminary in Menlo Park, Calif., before becoming parochial vicar at All Saints Parish in Corning, where he has remained ever since. The parish will celebrate his 45th jubilee and his retirement with a Mass and a picnic July 29.

After retirement Father Brown plans to live in the Corning area and help out in diocesan parishes. Although he spent 22 years traveling with the Navy, Father Brown still is eager to travel to the Holy Land, the great shrines of Europe and other places he hasn’t seen yet.