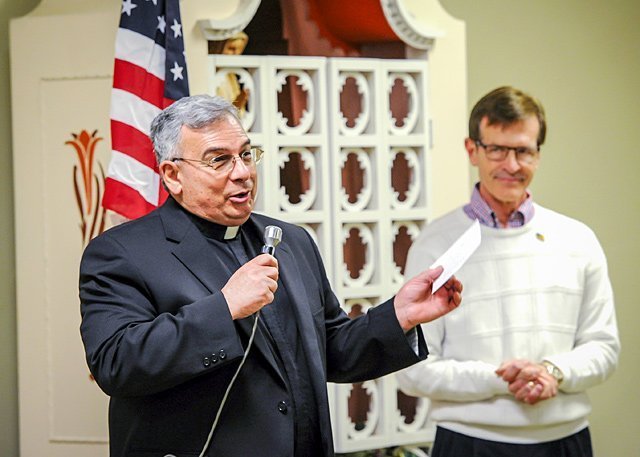 There aren’t many bases that Father John DeSocio hasn’t covered in nearly four decades of priestly service. He has ministered in parishes, on a college campus, in the diocesan vocations office, at a European seminary and as a military chaplain.

“I really feel the Lord has led me through this journey these past 39 years of ministry,” said Father DeSocio, who turned 70 on March 2.

Another role now awaits him — that of senior priest, a status that takes effect in late June at the end of his eight-year pastorate at St. Mary Southside Parish in Elmira.

He was ordained by Bishop Joseph L. Hogan on March 3, 1978, at Fairport’s Church of the Assumption. He served as intern priest at Immaculate Conception, Ithaca, from 1978-80; assisting pastor at St. Charles Borromeo, Greece, from 1980-84; and chaplain at Ithaca College from 1984-93.

From 1993-2002 he was the diocesan assistant to the bishop for vocations and priestly formation. Beginning in 2002, he spent five years as vice rector of the former American College of the Immaculate Conception, a seminary in Leuven, Belgium.

In 2007 Father DeSocio was appointed parochial vicar at Blessed Trinity/St. Patrick parishes in Tioga County. In 2009 he became pastor of St. Mary in Elmira, and since 2015 also has served as dean of the Rochester Diocese’s South Region.

In 1991 he was commissioned as a Naval Reserve chaplain, a role he maintained until he was honorably discharged in 2009. His chaplaincy duties included assisting people who were directly involved in the Sept. 11, 2001, terrorist attacks, and counseling young men on the Island of Crete who in 2003 were among the first U.S. troops in the Iraq War.
Other positions of note for FaOVERSET FOLLOWS:ther DeSocio were advisory-board member of Ithaca’s St. Francis Spiritual Renewal Center (1989-93) and vice president of the National Conference of Diocesan Vocations Directors (1999-2002). He also is a fourth degree Knight of Columbus and has served as volunteer firefighter and chaplain during several of his parish assignments.

To celebrate his transition to senior-priest status, receptions are scheduled for after all Masses at St. Mary the weekend of June 24-25. Father DeSocio will then relocate to his family home in northern Elmira — “back over the river,” he said with a laugh. But he said he plans to remain involved at area parishes.