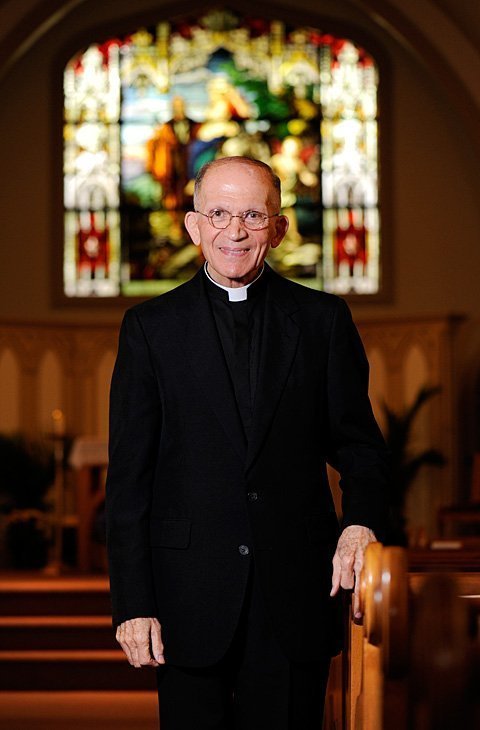 As his retirement beckons next month, Father Richard Beligotti said he’s "filled with praise and thanksgiving to God for my vocation" of 45 years of priesthood and 17 assignments in the Rochester Diocese.

"All I can do is marvel at the amazing action of God in my life," he remarked.

Father Beligotti, 70, credits the example of his parents, Sarafino and Linda, for providing the initial nudge toward the priestly life. He recalled the "countless Sunday Eucharists that we participated in as a family" while growing up at St. Mary of the Lake Parish in Watkins Glen, noting that he and his twin brother, Father Robert Beligotti, were longtime altar servers. He added that his parents often brought up the offertory gifts; his dad was an avid singer; and his pastor, Father Benedict Ehmann, taught him Gregorian chanting.

Further positive influences for Father Beligotti occurred at the former Padua High School, a Catholic preparatory school in Watkins Glen, where he came to admire the Polish Franciscan priests who staffed the facility. From there he attended St. Andrew’s and St. Bernard’s seminaries, leading up to priestly ordination — along with his brother and 10 classmates — on June 1, 1968, by Bishop Fulton J. Sheen at Sacred Heart Cathedral.

"I will never forget looking into the penetrating eyes of Bishop Sheen as I promised obedience to him and to his successors," Father Beligotti said.

In 1989 Father Beligotti assumed his first pastorate, at St. Charles Borromeo in Elmira Heights. After five years there, he served another five years as pastor of St. Thomas Aquinas, Leicester/St. Lucy, Retsof. He then was administrator of St. Bridget/St. Joseph, East Bloomfield (1999-2000); chaplain at Mercy Rehabilitation Center, Auburn (2000-01); administrator at St. John the Evangelist (Humboldt Street), Rochester (July-September 2001); pastor at St. Salome, Irondequoit (2001-07); and parochial vicar at Christ the King/St. Salome/St. Thomas the Apostle, Irondequoit (2007-10). Since 2010 he has served as sacramental minister for the cluster of St. Agnes, Avon/St. Paul of the Cross, Honeoye Falls/St. Rose, Lima.

Father Beligotti’s priestly service will be honored with a send-off Sunday, June 9 (see details in above story), before he enters into retirement with his brother.

"I feel the deepest thanksgiving for everything," Father Beligotti said.