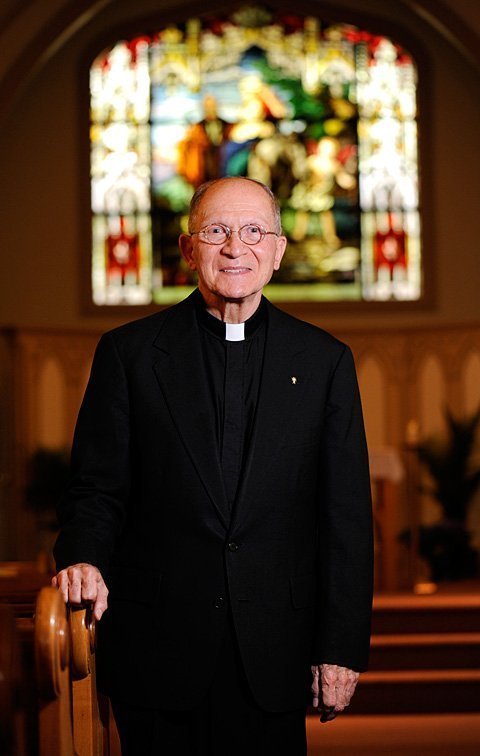 Throughout his 45-year priesthood, Father Robert Beligotti said he has consistently prioritized his flock over self-interests.

"I didn’t seek to save my life, but to spend my life in service to my people," remarked Father Beligotti, who is retiring in June. "I did what I was ordained to do and as well as I could for the people I was sent to serve. Christ helped me meet the trials and crosses that came my way, believing God would always be with me."

In 1988, after five years as assistant at St. Anthony of Padua, Rochester, he began his first pastorate at the same parish, where he stayed for another five years.

"I had never been in the inner city before," Father Beligotti said, recalling how the parish neighborhood, once largely made up of Italian-immigrant families, was becoming diversified. "We tried to keep Italian traditions alive as well as we could," he said, citing such events as St. Anthony Day celebrations and Masses in Italian.

From 1993-2000, Father Beligotti was pastor of St. Francis of Assisi in Auburn where he oversaw a church renovation. From 2001-02 he served as chaplain of Monroe Community Hospital — which he considers a highlight of his priestly career — and sacramental minister at St. Mary of the Assumption in Scottsville. He also was pastor of Our Lady of Mercy, Greece (2002-05); parochial vicar at St. Rita, Webster (2005-07); and parochial vicar at Church of the Assumption, Fairport (2007-10). Since 2010 he has served as sacramental minister at St. Marianne Cope Parish in Henrietta and Rush.

Father Beligotti and his twin brother, Father Richard Beligotti, are planning to retire initially to their family home in Watkins Glen before doing some traveling together.

"Now that I’m retiring, I can begin to think a little more of myself and do the things I’ve always wanted to do but was unable, due to my pastoral responsibilities, which came first," Father Beligotti said. "God and Jesus will still be the center of my life, but I’ll have more free time to read, pray, paint icons and travel, if God so wills."

A 45th-anniversary and retirement celebration for the Beligotti twins will take place June 9 at 3 p.m. at Church of the Good Shepherd, 3318 E. Henrietta Road, Henrietta. The event will feature a piano concert and an exhibit of Minhhang K. Huynh’s icons.