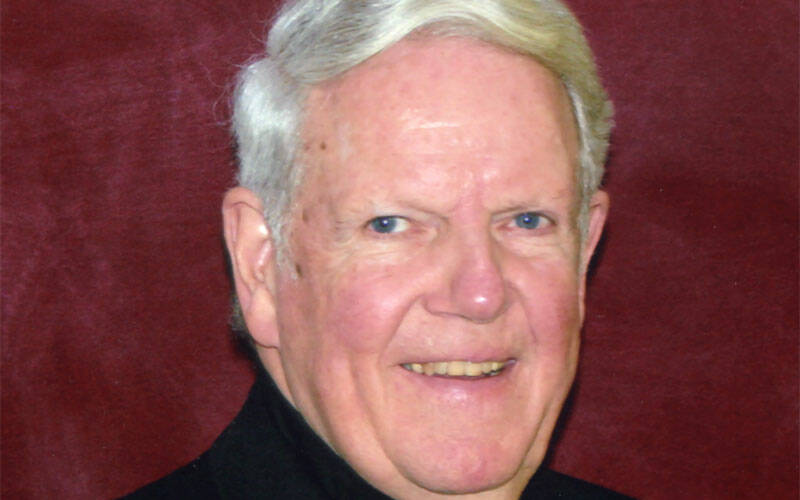 Father Thomas R. Statt, who was pastor at Greece’s Our Mother of Sorrows Parish for 19 years and Catholic chaplain at SUNY Geneseo for 12 years, died Aug. 31, 2022, at Rochester General Hospital after a short illness. He was 89 years old.

He was ordained May 31, 1958, by Bishop James E. Kearney at Sacred Heart Cathedral in Rochester. Father Statt then served as associate pastor of St. Mary Parish in Canandaigua (1958-61) and Corpus Christi in Rochester (1961-64).

In 1964, he became chaplain of SUNY Geneseo’s Newman Community, while assisting at St. Mary Parish in Geneseo. He remained in Geneseo until 1976, when he became director of Becket Hall, the former diocesan college-preparatory seminary program.

In 1981, Father Statt assumed the pastorate of Our Mother of Sorrows, which he held until attaining senior-priest status in 2000.

“He left the parish in great condition for me,” said Father Alexander Bradshaw, a senior diocesan priest who succeeded Father Statt as Our Mother of Sorrows’ pastor. “He welcomed me, introduced me to everyone. He was very helpful, and I was very grateful, no question about it. I was delighted to be his successor; I felt very much at home.”

For many years as a senior priest, Father Statt assisted at Greece’s St. Charles Borromeo Parish and at other parishes as needed.

“I couldn’t be happier,” Father Statt said in a 2013 Courier story noting his 55th jubilee of ordination. “I enjoy helping out wherever I can help.”

”Father Tom Statt was a giant of a man, not only in his tall stature but the quality of his character,” remarked Father Edward Palumbos, another senior diocesan priest, who was pastor of St. Charles Borromeo when Father Statt began assisting there.

Father Palumbos added that he know Father Statt for more than 30 years “as a friend, a wise counselor and a trusted adviser,” adding that, “I personally learned a great many things about priestly ministry by watching him in action. He leaves a great legacy of love, generosity and priestly service.”

“Tom was always such a very decent person. I never saw Tom angry; he always had a nice smile in his face,” said Father Charles Curran, a diocesan priest who was ordained the same year as Father Statt.

Father Curran — a longtime theology professor at Southern Methodist University in Dallas, Texas — added that Father Statt was “very influential” in the growth of campus ministry in the Diocese of Rochester.

Calling hours for Father Statt will be at St. Charles Borromeo Church 3003 Dewey Ave., on Tuesday, Sept. 6 from 4-7 p.m., concluding with Evening Prayer from the Office for the Dead.

His funeral will be at St. Charles Wednesday morning, Sept 7. Friends may call from 9-10 a.m., and the Mass of Christian Burial will begin at 10 a.m.

Interment will be in the family plot at Holy Sepulchre Cemetery.