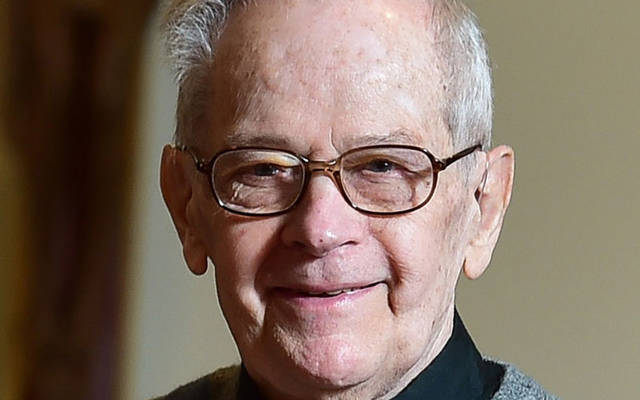 A native of Buffalo, Father Poorten graduated from Canisius High School in 1948 and entered the Society of Jesus at St. Andrew-on-Hudson in Poughkeepsie.

In 1954, he studied philosophy in Bellarmine College in Plattsburgh, and continued philosophy studies at Loyola Seminary in Shrub Oak, N.Y.

In 1956, he returned to Buffalo where he taught Latin and Greek at Canisius High School. He then began formal theology studies to prepare for priestly ordination at Woodstock College in Maryland. He received holy orders at Canisius College on June 19, 1963.

In 1963, Father Poorten spent his final formal period of formation, or “tertainship,” at St. Bueno’s in Wales, England. In 1964, he began teaching Latin, religion, communications and English at McQuaid Jesuit High School, where he professed his final vows in 1967. From 1972 to 1978, he also served as superior of the McQuaid Jesuit community.

Following his work at McQuaid, Father Poorten took a sabbatical at Notre Dame University’s Institute for Clergy Education in the fall of 1978. The following spring , he directed retreats at the Jesuit Center at Wernersville, Pa. That summer Father Poorten began a 31-year ministry of spiritual direction, leading retreats at the Loyola House of Retreats in Morristown, N.J. and serving as the superior of the Jesuit community there.

He spent a sabbatical year at the Jesuit School of Theology in Berkeley and Loyola Marymount in Los Angeles from 1991-1992, then continued his retreat and spiritual direction ministry at the Martyrs’ Shrine in Auriesville, N.Y. until 1999.

Father Poorten returned to Loyola Retreat House in Morristown and continued giving spiritual direction and directing retreats. In 2010, served as associate pastor of St. Michael Church in Buffalo, then retired to Murray-Weigel Hall in the Bronx in 2014.

Father Poorten’s funeral liturgy was celebrated in the Murray-Weigel Hall Chapel on Nov. 19, 2018, with burial at the Jesuit Cemetery in Auriesville.