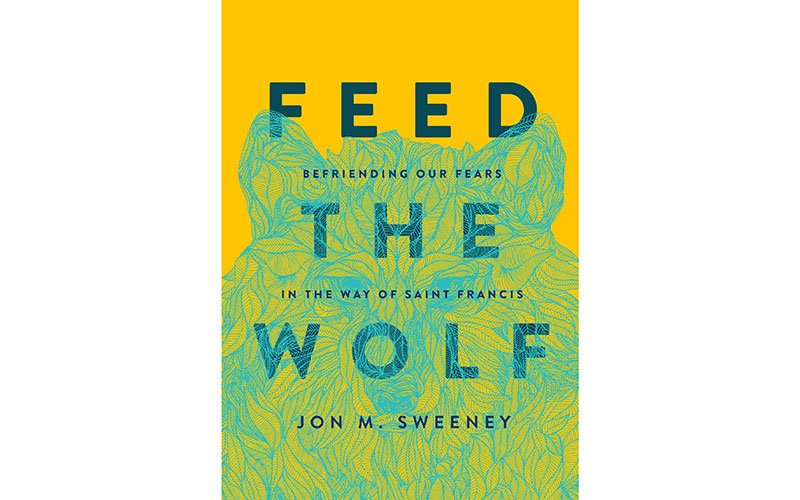 This is the book cover of "Feed the Wolf: Befriending our Fears in the Way of St. Francis" by Jon M. Sweeney. The book is reviewed by Kathleen Finley. (CNS photo courtesy Broadleaf Books)

In a time filled with many fears and spiritual “potholes,” Franciscan scholar Jon Sweeney gives us some helpful reflections on how to navigate these days in light of who St. Francis of Assisi was and how he lived.

Along the way, readers get to witness the Franciscan scholar musing about Francis as he encounters life today and almost eavesdrop on the process, especially since Sweeney often imagines dialogues that could have happened at the time of Francis’ life.

In the course of suggesting some spiritual practices for us today, we are treated to some succinct gems about who Francis was — then and now. In Francis’ declaration of his vocation to renounce his family’s privilege by shedding even his clothes, Sweeney remarks, “Francis may have lacked courage wearing a knight’s armor, but he seemed valiant wearing nothing at all. He had found something else, something brighter and bolder that allowed him to be free.”

And for us to follow that poverty and freedom is challenging indeed today. Sweeney observes:

“We are not satisfied with little, or with less than what we feel we deserve. Sometimes our spiritual teachers even encourage these feelings of entitlement, as if they come from holy places. They don’t. Francis knew better. Those of us who want to follow his wisdom might refocus our lives to avoid the issues and heartbreak that arise when we stray far from the simplicity for which we were made. Desires that lead to excess, misplaced concern and ownership too often harm our faith and harm others. A Franciscan in the 21st century holds possessions lightly and shares them easily.”

Sweeney goes on to explain that for Francis — and today for the pope named after him — this simplicity is a way for caring for others and for our planet.

Instead of Francis dying to his senses as some would see the spiritual life, Sweeney reminds us that he was more aware of the world around him, not less.

“We have many stories of Francis being close to birds, wolves, bugs, fish and rabbits. Beyond the sweet gentleness of these anecdotes, there is something more. He was paying attention to the rhythms and ways of the natural world — ways of life that are both more elementary and more essential than our 21st-century ones.”

And he was not at all a grim presence. “Even once while standing before the pope in Rome, with cardinals of the church all around him, Francis began to dance. (From his first biographer:) ‘He was speaking with such fire of spirit that he could not contain himself for joy. As he brought forth the word from his mouth, he moved his feet as if dancing, not playfully but burning with the fire of divine love.'” Yes, this is a saint for us today.

Sweeney says Francis lived lightly on the earth. He quotes Carl Jung when talking about the kind of knowledge that Francis embodied: “‘People speak of belief when they have lost knowledge,’ he said. Much better, he then added, ‘The (person willing to be simple) doesn’t believe, he knows, because the inner experience rightfully means as much to him as the outer.'”

In many helpful ways Sweeney shows us how “Francis was a little person who did small things that changed his world.” And we are challenged to do likewise.

Kathleen Finley is the author of several books on practical spirituality, including “The Liturgy of Motherhood: Moments of Grace” and “Savoring God: Praying With All Our Senses,” and recently finished teaching in the religious studies department at Gonzaga University.