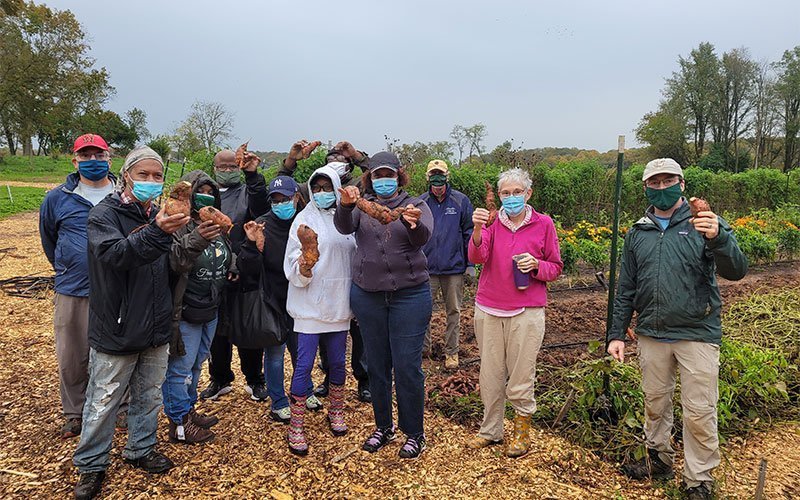 Volunteers work to harvest fresh, organic produce on Little Portion Farm outside of Baltimore. All produce is donated to the soup kitchen at the Franciscan Center of Baltimore. (CNS photo courtesy Steven Albright)

This is the fourth of a seven-part series on Catholic social teaching. This package focuses on the option for the poor and vulnerable.

Before the sun comes up, Steve Albright can typically be found starting his workday praying over a skillet on the stove.

“God, please don’t let me run out of food today,” Albright said he prays usually around 4 a.m. “We have to feed these people.”

Albright is the chef and director of culinary services at the Franciscan Center of Baltimore. The center’s soup kitchen serves an average of 400 to 600 meals per day, with the number of meals reaching more than 200,000 in 2020 due to the COVID-19 pandemic.

Several bits of Scripture help teach Catholics how to carry out this mission, including, “Whatever you did for one of these least brothers of mine, you did for me” (Mt 25:40) and “you shall not pick your vineyard bare, nor gather up the grapes that have fallen. These things you shall leave for the poor and the alien” (Lv 19:10).

The kitchen staff of the Franciscan Center of Baltimore are dedicated to those ideals.

Albright said he is often asked by former colleagues and friends if the pictures of food shared on the Franciscan Center’s social media channels are really of meals prepared for the homeless. They look too fancy for a soup kitchen — meals like eggplant parmesan or stuffed poblano peppers — all made from scratch.

“Why wouldn’t I be feeding this to the homeless?” he said. “We are changing the narrative of what a soup kitchen is.”

Despite the increase in numbers, Albright and his dedicated volunteers can serve meals made from scratch thanks to the work of volunteers and donations from two urban farms and two farms outside the city. He also achieved his goal of having a fresh salad on the plate every day this summer.

More than 13 years sober, and close to seven years out of prison, Albright said his vocation to feed the poor and “beaten down” in Baltimore is done out of reverence.

“It’s what God has called me to do,” he said. “I would not be here without God’s grace. I wholeheartedly believe that.”

In addition to prepared meals and bags of groceries for clients, the Franciscan Center provides social services for those in need of work or housing for their families.

Executive director Jeffrey Griffin said many members of the Franciscan Center staff are former clients. That helps staff members truly connect with those who are coming in their doors in need of services each day.

“The empathy is so obvious,” Griffin said. “People are living out their faith every day here.”

In speaking about one staff member — an 82-year-old social worker — Griffin said he can see the Gospel at work especially through her. This staff member can call anyone in the city and secure housing or a place of work for a client, thanks to her tireless dedication to and ability to foster important relationships.

For Griffin, his motivation to work countless hours ensuring there’s food on the plates and coats on the backs of his clients is deeply rooted in his faith. He was raised as the youngest of four boys by a single mother who found assistance in their church community.

“I think that instilled in me that you have to help people who are not doing as well as you are,” Griffin said. “If we don’t continue that tradition some bad things will happen to our country and our society.”

As the U.S. Catholic bishops have noted, helping the poor helps all of society. Assistance for those in need helps them to become active participants who can then contribute to the community.

“We are helping the city take care of individuals in ways the city is unable to,” Griffin said. “We help people stay in their homes, families can continue to work and children can go to school.”

(Jones is a freelance writer.)