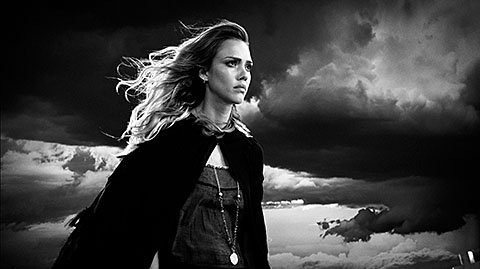 Jessica Alba stars in a scene from the movie"Frank Miller's Sin City: A Dame to Kill For." The Catholic News Service classification is O -- morally offensive. The Motion Picture Association of America rating is R -- restricted. Under 17 requires accompanying parent or adult guardian.

NEW YORK (CNS) — The hard-boiled, excessively violent milieu of "Frank Miller’s Sin City: A Dame to Kill For" (Weinstein) is so overdone it plays like a satire.

The lewd plot and glib noir style of this sequel to 2005’s "Sin City" — based, like its predecessor, on Frank Miller’s graphic novels — aren’t the real selling points, anyway: Ava (Eva Green), the "Dame" of the title, spends more than half her screen time nude.

"If you can’t love me, hate me. If you can’t forgive me, punish me," she says. Graphic novels sometimes can become compelling dramas. But this "Sin City" amounts to little more than a smutty comic-book adaptation using competent actors as bait.

Miller, who wrote the script and co-directed with Robert Rodriguez, emphasizes lurid bloodletting amid the retro black-and-white setting. All women are objects of desire, while the men exist only to have their eyes gouged out and fingers maimed while they absorb fists and bullets.

Ava is a seductress who lures the film’s hero, detective Dwight (Josh Brolin), into several gory encounters with various thugs.

"A city’s like a woman or a casino," Johnny snarls in a voiceover. "Somebody’s gonna win. And it’s gonna be me." If anybody comes away from these sordid proceedings a winner, it’s certainly not the audience.