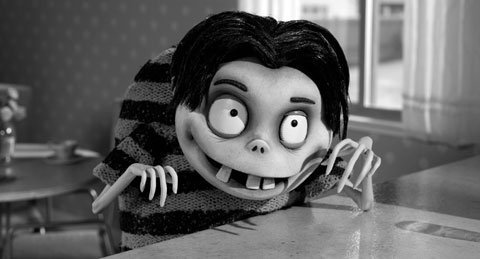 NEW YORK (CNS) — Director Tim Burton’s gothic comedy "Frankenweenie" (Disney) is a skillful 3-D animated spoof of horror conventions built around the heart-warming relationship between a boy and his dog.

This black-and-white, stop-motion cartoon — an expanded version of Burton’s 1984 live-action short of the same title — might prove too scary for small fry. But it will delight their older siblings and amuse parents as well.

After his beloved pet — and constant companion — Sparky is killed in an accident, socially isolated but scientifically gifted Victor Frankenstein (voice of Charlie Tahan) uses stock monster-movie methods to bring the pooch back to life.

Despite his subsequent efforts to conceal his breakthrough from his parents (voices of Catherine O’Hara and Martin Short) and from his peers — voiced, among others, by Atticus Shaffer and James Hiroyuki Liao — Victor’s secret gets out. And when his schoolmates try to emulate his feat, the results are temporarily disastrous.

Said classmates constitute an odd assortment of entertainingly eerie figures, including pint-sized versions of characters long ago made famous by Boris Karloff and Peter Lorre. Another familiar genre persona, the Weird Girl (also voiced by O’Hara), becomes the vehicle for the only material in the picture that some might consider objectionable.

The Weird Girl believes that her cat, Mr. Whiskers, is given to prophetic dreams, and that the subject of each dream can be identified by the fact that Mr. Whiskers’ droppings afterward form the first initial of that person’s name. The Weird Girl relates all this — visual aid included — to indicate to Victor that something dramatic is about to happen to him.

Victor’s interest in experimentation is sparked by his Vincent Price-like science teacher, Mr. Rzykruski (voice of Martin Landau). Though a subplot involves Mr. Rzykruski’s persecution at the hands of ignorant townsfolk, there’s no direct connection drawn between their fear of him and their adherence to any form of supernatural belief, religious or otherwise. And while Mr. Rzykruski praises the value of science at some length, he never does so to the disparagement of faith.

The light-hearted tone of John August’s screenplay, moreover, together with the less-than- scientifically plausible events on which so much of the plot turns, make it doubtful that any serious point is being made — apart, perhaps, from a general endorsement of learning in the broadest sense.

The film contains mild scatological humor and some science-fiction hokum. The Catholic News Service classification is A-I — general patronage. The Motion Picture Association of America rating is PG — parental guidance suggested. Some material may not be suitable for children.