‘Frattelli Tutti' and the parable of the good Samaritan - Catholic Courier 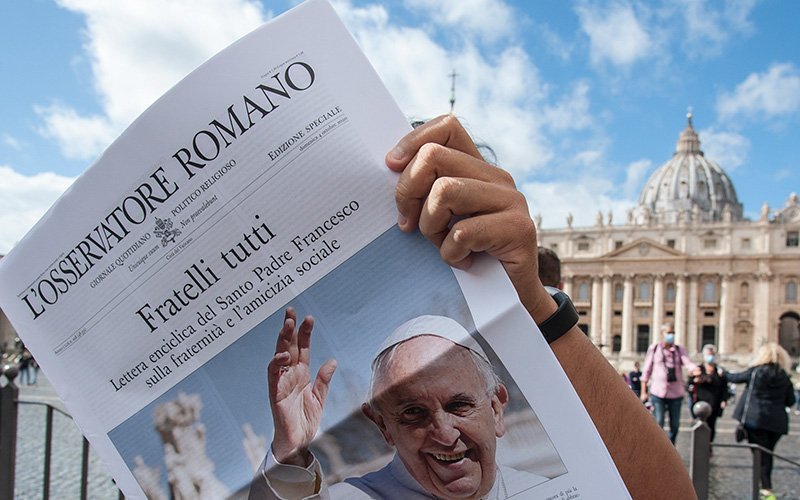 Free copies of L'Osservatore Romano, the Vatican newspaper, with the front page about Pope Francis' new encyclical, "Fratelli Tutti, on Fraternity and Social Friendship," are distributed by volunteers at the end of the Angelus in St. Peter's Square at the Vatican Oct. 4, 2020. (CNS photo by IPA/Sipa USA, Reuters)

Who is my neighbor? It’s a question as old as Jesus, and as new as today’s sunrise.

While visiting a large city, a friend went to a famous deli. On her way into the restaurant, she saw a homeless person, looking forlorn, sprawled on the sidewalk.

The deli’s servings were huge, so she had hers cut in half and saved the other half for the man she’d seen on the street. When she left the restaurant, she handed him a large bag with the sandwich inside.

As she walked away, she was surprised to realize the man was running after her. “Ma’am, ma’am,” he called insistently.

I didn’t ask my friend what she thought in that moment. But I might have reacted with alarm. What does he want? What is he going to ask of me? Is he mentally ill?

So what did the man want? He wanted to return her umbrella, which she inadvertently left in the bag she handed him.

The man desired to be a neighbor.

In his recent encyclical, “Fratelli Tutti, on Fraternity and Social Friendship,” Pope Francis takes on the challenges facing our world and the persistent question of our relationship with each other and with the poor.

In one section, the pope examines the familiar parable of the good Samaritan, a fitting story for our troubled times. Jesus loved to teach with stories, and they always have multiple layers of meaning. Someone had asked him, “Who is my neighbor?” and this story was his response.

A man is left for dead by robbers. A priest and Levite pass him by. But a Samaritan helps him, going to lengths to ensure the injured man’s well-being.

Pope Francis leads us through a short history of faith’s definition of “neighbor.” In ancient times, a neighbor was one within your tight circle, your tribe. Unfortunately, sometimes we still fall into that trap.

But the Hebrews themselves began to expand this concept of neighbor to those beyond their group. They understood the loneliness of exile and the importance of welcoming the stranger.

Jesus took the concept of neighbor to whole new levels. The outcast, the sinner, those on society’s margins, the Samaritan — a group despised by the Jews of Jesus’ time — these were Jesus’ neighbors.

Pope Francis points to the priest and Levite.

“They were religious, devoted to the worship of God ‚Ä¶ This detail should not be overlooked,” wrote the pope.

Belief and worship “are not enough to ensure that we are actually living in a way pleasing to God,” Pope Francis reminds us. Indeed, loving our neighbor — near and far, like us or very different — is what God desires.

My friend saw a neighbor and reacted with a small, neighborly gesture. But the man tried to be a neighbor as well. He was showing his humanity, his dignity, his integrity by returning an umbrella.

He could have shrugged and eaten his sandwich.

But he wanted to be acknowledged as a neighbor. Look at me, he seemed to say, and love me. I am not just hungry for food, but for recognition and respect.

Pope Francis, in retelling the parable of the good Samaritan, says the tale “is clear and straightforward, yet it also evokes the interior struggle that each of us experiences.”

How do we love and acknowledge our neighbor, not just the guy next door with the political opinions we dislike, but the person on the other side of the globe threatened by the climate change we don’t want to confront?

Jesus challenges us to expand our ideas of neighbor.