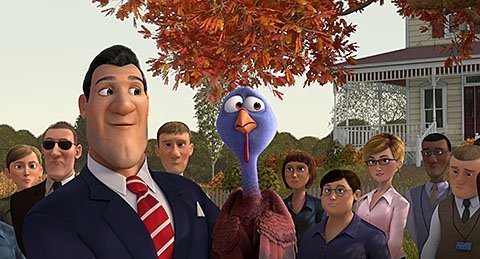 The president of the United States, voiced by Jimmy Hayward, and Reggie, voiced by Owen Wilson, are seen in the animated movie "Free Birds." The Catholic News Service classification is A-I -- general patronage. The Motion Picture Association of America rating is PG -- parental guidance suggested. Some material may not be suitable for children.

NEW YORK (CNS) — Parents be warned: Your kids will want you to revise the Thanksgiving dinner menu once they see "Free Birds" (Relativity), a 3-D animated adventure about two rogue turkeys who travel back in time to change the "main course" of history.

Jimmy Hayward ("Horton Hears a Who!") directs this zany but good-natured comedy, co-written with Scott Mosier (and having nothing to do with the Lynyrd Skynyrd song "Free Bird"). There’s something for every age wrapped up in a holiday-themed package, including cute-as-a-button characters, clever (but sometimes a bit rude) humor, a send-up of science fiction, and even a little (superficial) slice of American history.

There’s also a good message for the youngest viewers: Look out for each other, or someone may end up as dinner (literally).

Our turkey hero, Reggie (voice of Owen Wilson), is an outcast on the farm. He doesn’t follow the dimwitted flock, and his warnings about the farmer and his ax go unheeded — until, for some, it’s too late.

Out of nowhere, the president of the United States (voiced by director Hayward) arrives to choose a turkey to receive the official pardon prior to the national holiday. Reggie’s the one, and he is whisked to Camp David, where he lives in the lap of luxury.

Before long he is addicted to pizza ("much better than corn") and obsessed with watching a romantic telenovela on TV.

His strange interlude ends when he is abducted by fellow bird Jake (voice of Woody Harrelson). As the founder of the "Turkey Freedom Front," Jake enlists Reggie on a wild scheme: travel back to the first Thanksgiving in 1621, and keep turkey off the dinner table.

And so these turkeys hijack a time machine (voiced by George Takei of "Star Trek" fame) and land in Plymouth, Mass. There they meet up with their feathered ancestors, led by Chief Broadbeak (voice of Keith David) and his spunky daughter, Jenny (voice of Amy Poehler).

For Reggie and Jenny, it’s love at first peck, while Jake butts beaks with Jenny’s tough brother, Ranger (also voiced by Hayward), over leadership of the master plan.

The Pilgrims are a bumbling lot, grousing over the lack of food and ganging up on Governor Bradford (voice of Dan Fogler). It’s left to the sadistic Myles Standish (voice of Colm Meaney) and his pack of vicious dogs to hunt down the turkeys in time for that first dinner with the native Indians.

A rollicking adventure ensues, with echoes of the great escape in 2000’s "Chicken Run." While some of the action sequences may be too intense at times for younger viewers ("Those turkeys are angry birds," one Pilgrim quips), it’s all in good fun, and the tasty resolution, involving one of America’s favorite foods, is bound to please.

The film contains a few mildly perilous situations and some rude humor. The Catholic News Service classification is A-I — general patronage. The Motion Picture Association of America rating is PG — parental guidance suggested. Some material may not be suitable for children.