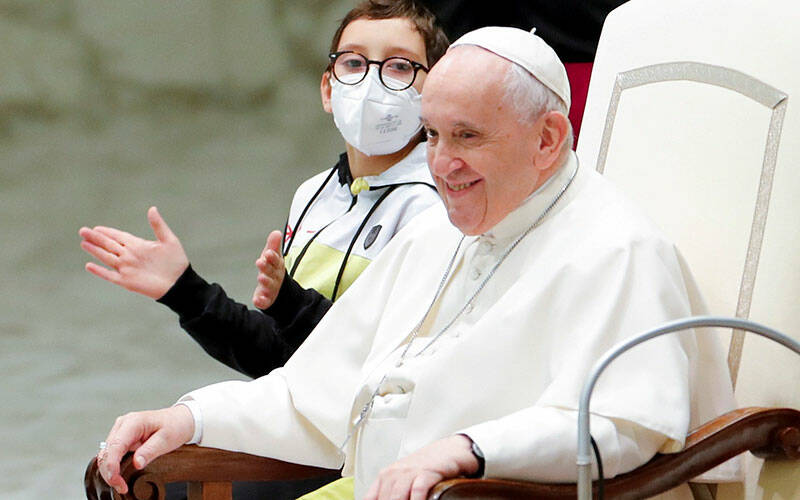 Pope Francis sits next to 10-year-old Paolo after the boy spontaneously walked onto the stage during the weekly general audience at the Vatican Oct. 20. (CNS photo by Remo Casilli/Reuters)

VATICAN CITY (CNS) — Pope Francis had a special guest help him illustrate the meaning of Christian freedom: a young boy wandered onto the stage during the pope’s general audience and made himself at home.

At his audience Oct. 20, the pope was continuing his series of talks on St. Paul’s Letter to the Galatians and planned to reflect on the freedom that comes from serving and loving others.

As the Bible passage was being read, 10-year-old Paolo walked onto the stage and right up to Pope Francis, who shook his hand.

A papal aide offered Paolo a seat next to the pope, which elicited applause from the crowd, and from the little boy. But he did not stay seated long; after clasping the pope’s hands again, Paolo pointed with amazement at the pope’s zucchetto. Moments later, the young boy could be seen happily bounding down the steps, returning to his mother wearing a brand new zucchetto on his head.

Departing from his prepared remarks, Pope Francis said the boy’s courage reminded him of “what Christ says about the spontaneity and the freedom of children.”

“Jesus tells us, ‘If you do not become like children, you will not enter the kingdom of God.’ It is the courage to be close to the Lord, to be open to the Lord, to not be afraid of the Lord. I thank this child for giving this lesson to all of us,” the pope said.

“There is no freedom without love,” Pope Francis said. “The selfish freedom of doing what I want is not freedom because it comes back to yourself, it isn’t fruitful.”

“It is Christ’s love that has freed us, and again it is love that frees us from the worst slavery, that of the self; therefore, freedom grows with love,” he said.

The freedom St. Paul writes about does not imply “a libertine way of living, according to the flesh or following instinct, individual desires or one’s own selfish impulses,” the pope said. Rather, the apostle speaks of a freedom that is “fully expressed in love.”

“It is the love that shines out in gratuitous service, modeled on that of Jesus, who washes the feet of his disciples and says, ‘I have given you an example, that you also should do as I have done to you;’ to serve one another,” the pope said.

St. Paul, the pope continued, also warns about viewing freedom as “doing what you want and what you like” which only leads to the realization “that we are left with a great emptiness inside and that we have used badly the treasure of our freedom.”

Pope Francis said Christians need to “rediscover the communitarian, not individualistic, dimension of freedom,” especially in the wake of the coronavirus pandemic.

“The pandemic has taught us that we need each other, but it is not enough to know this,” he said. “We need to choose it in a tangible way every day. Let us say and believe that others are not an obstacle to my freedom, but rather the possibility to fully realize it because our freedom is born from God’s love and grows in charity.”