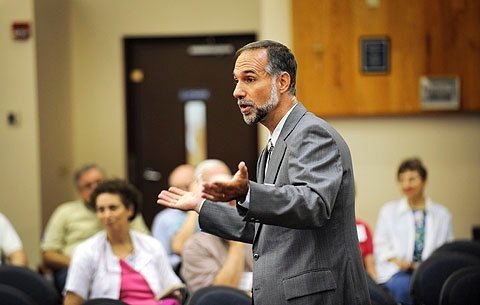 Canon lawyer Philip Gray gives a presentation on moral conscience as part of the Festival of Freedom at the Notre Dame Retreat House in Canandaigua June 22.

CANANDAIGUA — In today’s world, people have an abundance of information, said David L. Cook, an attorney and partner with the firm Faraci Lange who is an active local leader with the Church of Jesus Christ of Latter Day Saints.

But despite all the information available to people, Cook said he doesn’t see an overabundance of truth yielded from that information. People need to use humility, rather than pride, to get at truth, he said.

"Sometimes we speak for God when he hasn’t spoken," he said.

Cook was one of three attorneys to talk about how people can dig past headlines to get at the truth during the talk "What Can You Read/What Can You Watch to Get the Truth and Nothing But the Truth?" June 22 at the Festival for Freedom held at Notre Dame Retreat House. The religious-freedom-themed festival, which features free admission, will continue through July 4.

In addition to Cook, the discussion included canon lawyer Philip Gray of Texas and Anna Franzonello, staff counsel for Washington D.C.-based Americans United for Life. The three talked about how to evaluate information heard on the news, and how to more effectively discuss issues with people with whom they disagree.

"We have to go deep within ourselves to hear God’s voice as he speaks to us so we can filter out the untruths," Gray told the audience of about 50 people.

He said truths are found in God’s word.

"The most important way to form our conscience and intellect is to read Scripture — not only read it, but to pray it," he said.

Gray said people of faith need to educate themselves on the works of great writers and thinkers, such as St. Thomas Aquinas, to know if their opponents are quoting them accurately and within the proper context. He also noted that proper formation of youths is crucial to the health of the church in the future.

He suggested people ask neutral questions to learn more about their opponents’ positions when they begin to engage in debate with them. For instance, people could ask their opponents the sources of the quotes and statistics they use and the exact wording of original quotes.

"You have to know what your opponent is thinking and what they think," Gray said.

Franzonello suggested people seek out primary sources, such as documents and encyclicals, to find out what and why the church supports or opposes an issue. She also recommended people try opposition research, in which they research the arguments of people with which they don’t agree. Dialogue and group discussions can help people get at the truth, she said, noting that Jesus sent his followers out two by two to evangelize.

She suggested that people seek out opportunities for fellowship with those people with whom they might not agree. Engaging people and building friendships in a neutral setting, such as a softball field, can help open people’s minds in the future, Franzonello said.

She also urged that people also exercise their right to vote.

"A lot of people feel disenfranchised, but at the state and local level, we see a lot more responsiveness," Franzonello said.

After the talk, Franzonello said she was happy to see so many people engaged in the issue of religious liberty and conscience formation. She said that the U.S. Conference of Catholic Bishops has recognized the Canandaigua festival as being one of the top events to mark the two-week Fortnight for Freedom, a national event organized by the USCCB to draw attention to what it says are infringements on religious freedoms.

Deacon Claude Lester, who chaired the "Renewing Our Legacy" task force in Canandaigua, which organized the event, said speakers were identified through networking and discussions among the task force of people they have read or heard.

The event has been funded by private donations, and many speakers were flexible with their honorariums, but he noted that that doesn’t mean the two weeks have been paid for, including the speakers’ steep travel bills.

"This is an act of faith," he said. "We know that all the bills will be paid, and we are not looking to do any more than that."

He also didn’t rule out the possibility that the festival could be the start of future annual events focused on religious freedom or other topics.

"There is not a game plan, but there is an openness and a recognition that the work is not going to be accomplished in just two weeks," Deacon Lester said.

Several audience members said they were so glad they took the time to attend the festival.

"I simply came yesterday because my wife wanted to come, but I’m glad my wife did, because now I want to come to every one (of the talks)," said Bob Cirre, a parishioner of St. Mary in Canandaigua.

"We are definitely for keeping government out of the church," Connie Cirre said. "The speakers are just wonderful."

"In my heart, knowing that there are others that feel as I do gives me courage to go on in faith and hope and love," said June Avery of Geneva, a member of Our Lady of Peace Parish.

EDITOR’S NOTE: An updated schedule of events for the festival is at http://festivalforfreedom.com. Some talks also will be recorded and posted on the website. Events recently added to the schedule include three showings of the first-run movie "For Greater Glory" on June 30. The Canandaigua Area Transportation System is running a shuttle on weekdays to Notre Dame Retreat House from the St. Mary Church’s parking lot for $2 per person each way.