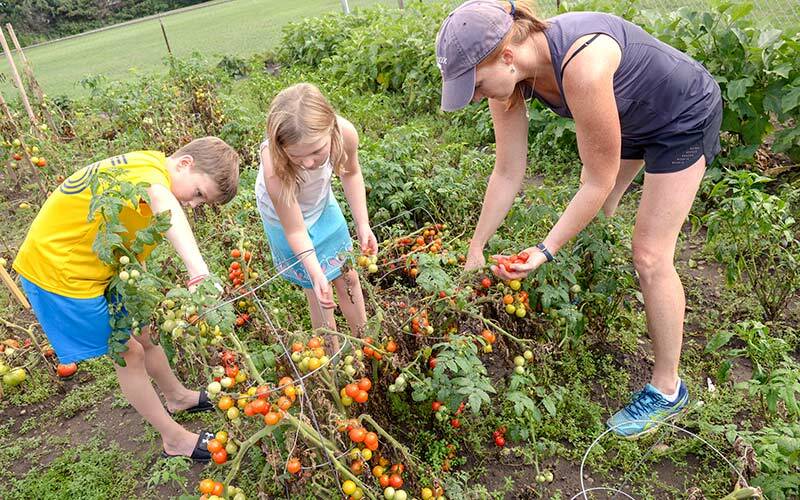 A garden lies dormant underneath a blanket of mulched leaves on the grounds of St. Patrick Church. It may not look like much now, but just a few months ago, the garden produced 800 pounds of food for needy families in the Victor area.

“God gave us a good harvest,” remarked Virginia Lyle, one of the coordinators of St. Patrick’s Giving Garden.

The garden was established back in the early 2000s as a way of building community among the members of St. Patrick Parish while also providing food for neighbors in need, according to Joe Murphy, one of the garden’s founders. Each year, the vegetables harvested from the garden are given to the Victor-Farmington Food Cupboard, he said.

The food cupboard is able to store and distribute a limited amount of perishables, but this year the need in the community was so great that the vegetables didn’t stay at the food cupboard for very long, Lyle said.

“One particular morning … the food cupboard’s director told me that 200 families had already been in asking for fresh veggies by 11:30 in the morning,” she said.

Volunteers worked hard to get St. Patrick’s Giving Garden up and running

In its early days, the garden got off to a bit of a rocky start, Murphy recalled.

“The first couple years, well, we grew a lot of stones,” he said with a chuckle. “It was just virgin ground that hadn’t been tilled in years.”

At first, volunteers came to the garden each day to water its vegetables, but that model changed rather quickly, Murphy said.

“The first year, it was a lot of traveling back and forth on a daily basis. It just happened to be one of those years when it was very dry, so we decided that we needed to automate,” he explained.

Murphy worked with fellow Giving Garden founders Dave and Cheryl Avery to install an underground sprinkler system on a timer. This took the burden of watering the garden off the volunteers’ shoulders, but they still visited regularly to weed and harvest.

“Every year, we had different families that would come out and literally get on their hands and knees and plant, so it was really a grassroots effort,” Murphy said.

The garden’s volunteers cultivated friendships as well as vegetables

Murphy formed friendships with many of his fellow Giving Garden volunteers. Although knee surgery forced him to stop physically working in the garden several years ago, he still keeps in touch with many of the people he previously worked alongside.

“It built community in that sense. I have grown personally from it,” he said.

Many of the people who volunteer in the garden are parishioners who have pledged to serve as members of this ministry, while others simply show up when more hands are needed, Lyle said. Some of the volunteers come armed with green thumbs and decades of gardening knowledge, while others describe themselves as “worker bees,” she added.

Teens from the parish frequently volunteer in the garden, and the garden provides a great opportunity for families as well, Lyle said.

“It’s a way to get children involved in growing food, seeing the miracle of God’s creation and maybe even making vegetables more interesting, all without having to dig up their own yards or take on the whole responsibility for keeping the plants alive,” she said.

Murphy and the other gardeners from the parish have enjoyed passing on their gardening knowledge to the children who worked in the Giving Garden with their families.

Lyle hopes the Giving Garden will be even more appealing to children in 2023.

“We plan to grow some colorful varieties of standard vegetables to delight a child’s heart,” she said.

The volunteers also will be planting vegetables that can be enjoyed either raw or cooked — such as sugar snap peas and cherry tomatoes — since some of the people who rely on the food cupboard have limited access to cooking facilities, Lyle said.

The garden will begin utilizing raised beds this spring. Parishioner Bob Belleville already has built four of the wooden frames for the beds and plans to build five more at no cost to the parish, she said. In February, the garden’s organizers will be seeking parishioners willing to fund the purchase of the lumber and hardware needed to build more raised beds, or to “adopt” a specific crop by providing money for seeds, fertilizer and other supplies, Lyle said.

“Each sponsored bed would be marked with the benefactor’s name. Each adopted crop will have an adoption certificate for the donor showing the details of that particular vegetable,” she explained.

The garden’s volunteers also are collaborating with St. Patrick’s Liturgy Committee to grow some flowers that can be used to decorate the church, noted Father Edison Tayag, pastor at St. Patrick.

Tags: Faith in Action, Ontario County News
Copyright © 2022 Catholic Courier, Inc. All rights reserved. Linking is encouraged, but republishing or redistributing, including by framing or similar means, without the publisher's prior written permission is prohibited.