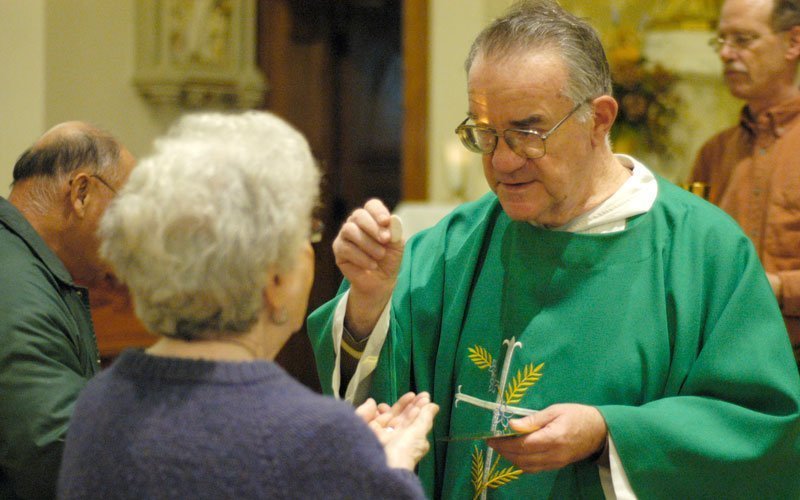 Father Bart Minson assumed his first pastorate in the United States on Sept. 1, 2008, more than four decades after he was ordained a Capuchin Franciscan friar. He became pastor of Holy Cross Parish in Ovid and St. Francis Parish in Interlaken when fellow Capuchin Franciscan Father William Winters finished his six-year term there and relocated to East Patchogue, N.Y.

Father Minson is no stranger to being the shepherd of a flock, however. The Brooklyn native spent 37 years evangelizing and ministering to Catholics in Okinawa, Japan, and another four doing the same in Turkey before returning to the United States last spring.

Father Minson said he felt drawn to the priesthood at a young age and entered a high-school seminary in 1952. Four years later he entered the Capuchin Franciscan order, and he was ordained eight years after that. Those 12 years of formation were a period of discernment for him, and during that time his teachers and mentors affirmed his vocation, he said.

“They’re looking at you for 12 years, you’re looking at them for 12 years, and you decide together that this is what you want to do for the next 40 years. You think that’s what God wants, and the decision is made before you’re ordained,” Father Minson said.

Father Minson was ordained in November 1964, two years into the proceedings of the Second Vatican Council, which took place in Rome from 1962-65. As a result of the council, priests soon began presiding over the Mass in English rather than the traditional Latin.

“I said my first Mass on the first day we were able to use the English in the liturgy. That was the first Sunday of Advent in 1964,” he recalled.

Since high school Father Minson had known he wanted to be a missionary, and after his ordination he was sent to minister in Okinawa.

“It’s our order’s policy that the first two years you go to language school, which is an excellent policy. If you can’t speak Japanese at least a little bit fluently you’ll be useless,” Father Minson said.

Once he’d become accustomed to the Japanese language and culture Father Minson spent the better part of the next four decades serving Catholics at a number of different parishes in the area.

“Our parish situation was quite different from (that of) the States,” he said.

Catholics clergy and women religious in the area reached out to non-Catholics by offering kindergarten classes, but kindergarten for a Japanese child was different than the kindergarten an American child would have experienced, Father Minson said.

“When a child enters the first grade as a 6-year-old in Japan they have to have at least two years of kindergarten,” he said. “Most of our Catholic kindergartens (in Japan) offer three years. Children could come in at 3 years old.”

Father Minson thought the kindergarten apostolate was a very valuable component of the church’s mission in Japan, and he made it a point to eat lunch with the children in their classrooms twice a week to build up a rapport with them. The extended period of time children spent in kindergarten allowed kindergarten teachers, staff and clergy more time to get to know children and their families, especially if the families sent several children through the kindergarten.

“We could have a relationship with the family for six years or so, and they were very grateful for the quality of the school,” Father Minson said.

When his order brought up the idea of reassignment five years ago, Father Minson felt the time was right for him to move on.

“It seemed like the church was going along good. I felt that what I had wanted to do in Japan was done, so I wanted to go somewhere new,” he said.

Father Minson relocated to Turkey, where he was pleasantly surprised to find Turks who were receptive to Catholicism.

“We’d have a few baptisms every year. That made me very hopeful,” he said.

Father Minson returned to the United States last spring and embarked upon his first domestic assignment in September. The communities of Ovid and Interlaken are very different from Japan and Turkey, but Father Minson said he feels right at home in the Finger Lakes region because he usually took a retreat every other year at St. Fidelis Friary in Interlaken.

“Father Bill (Winters) was telling me that I probably know the area better than anyone else in the province who hasn’t been assigned here,” he said.

Father Minson said he considers Sunday Mass the most important activity in any parish, with the catechetical education of children ranking a close second. He plans to continue to emphasize those two aspects of parish life, but aside from that he has no concrete goals of plans for the parishes as of yet.

“I’m the new pastor. I want to keep my eyes and ears open for the next few months before I make any decisions,” he said.