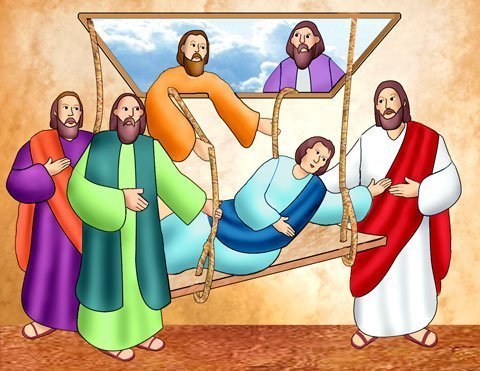 When Jesus was teaching it was not un¬¨usual for people to come from many of the towns and villages in the area. On a par¬¨ticular day Pharisees and teachers of the law had gathered as part of the crowd to hear what Jesus had to say. In addition to his teaching, Jesus took time to heal peo¬¨ple who were sick or injured.

Several men knew that Jesus was performing miracles of healing, so they brought one of their friends who was paralyzed, hoping Jesus would help him. But getting near Jesus was not as easy as they had hoped. There were so many people crowding around that the men could not get through with the stretcher.

The men were determined to bring their friend to Jesus. They climbed up on the building where Jesus was, and they pulled back the roof tiles. When they had made a hole large enough, they lowered the man down on his stretcher right in front of Je¬¨sus. Jesus was impressed with their faith. He said to the man on the stretcher, “As for you, your sins are forgiven.”

The scribes and Pharisees who were in the crowd were angry at what Jesus had said. They said to each other, “Who is this who speaks blasphemies? Who but God alone can forgive sins?”

Jesus knew what the scribes were say¬¨ing so he said to them, “What are you thinking in your hearts? Which is easier to say, ‘Your sins are forgiven,’ or to say, ‘Rise and walk?’ But that you may know that the Son of Man has authority on earth to forgive sins.”

Than Jesus looked down at the man still on the stretcher, “I say to you, rise, pick up your stretcher, and go home.” The man was immediately healed.

Obeying Jesus, he picked up the stretch¬¨er that he had been carried in on and went home praising God. The people who had seen what Jesus had just done said among themselves, “We have seen incredible things today.”

READ MORE ABOUT IT:
Luke 5

Q&A 1. How did the men finally bring their friend to Jesus?
2. How did the scribes react to the words Jesus said to the paralyzed man?

The first Sunday of Advent is also the first Sunday of the Church calendar. Advent is the four week period during which we prepare for the Christmas season. Imagine the world just before Jesus was born into it. Joseph and Mary were in a stable in Bethlehem, waiting for the promised moment to happen. Wise men from the east were seeking the newborn king of the Jews. Shepherds had been told by angels to look for the Messi¬¨ah. While it is easy to get caught up in the excitement of Christmas, we should always remember the reli¬¨gious meaning ofAdvent and prepare for our Savior to be born.

Pope Gregory III (d. 741), a Syrian priest, had earned a reputation for be¬¨ing a holy and educated man. He was so loved and respected he was named to become the Pope after the death of Gregory II. One of his first official acts as Pope was to protest against the em¬¨peror’s work to stop the veneration of holy images. The priest messenger who had to deliver the letter of protest was captured by soldiers and banished from the land. Eventually there was a time of peace, so Gregory tried to rebuild and remodel some of the churches of the day. In his last days, in another time of conflict, Gregory appealed to the bishops to restore order and rebuild anything that had been damaged in battle. We honor him on December 10. 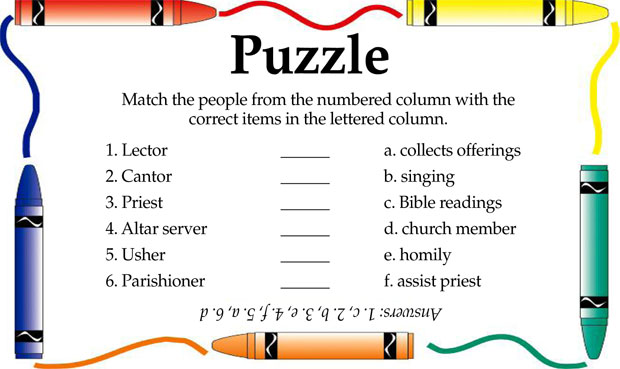