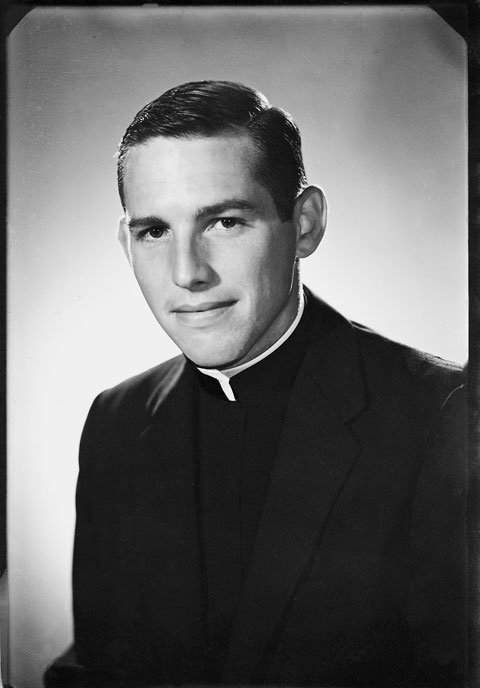 Father Matthew Clark, around the time of his priestly ordination. (Photo courtesy of the Clark family)

Those who knew him prior to his 1979 appointment as eighth Bishop of Rochester recall the young Matthew Clark as athletic, intelligent, unassuming and funny.

They use the same adjectives to describe him today.

Bishop Clark’s sister, Helen Early, noted that her brother is the product of faith-filled parents who taught him to treat everyone equally and not to take life too seriously.

Nieces say their Uncle Matt dotes on them nearly as much as they dote on him.

Bishop Clark grew up in Waterford, a village a dozen miles north of Albany and situated at the junction of the Hudson and Mohawk rivers and the Erie and Champlain canals. Bishop Clark used to while away hours on the area’s baseball diamonds and basketball and tennis courts or swim in rivers or canals with the other neighborhood kids, his sister said.

His father, Matthew Harvey Clark Jr., who retired as a U.S. Customs port director, was a sports fan and an easygoing jokester, family members said. Bishop Clark’s eldest niece, Grace Hastings, recalled her grandfather tossing washed dishes at his children — and later his grandchildren — for them to dry as his wife, Grace, called out from another room for them to knock it off.

“He (my grandfather) never broke a dish,” said Hastings, who is one of Helen Early’s five daughters.

Helen Early said her mother, Grace Bills Clark, was willing to do anything for her two children, including working split shifts as a telephone operator when her husband lost his plumbing business during the Depression.

“She always had the attitude that we could do whatever we wanted to do,” Helen Early said. “She wanted us to be happy, and she would support us. She never tried to direct us. She was always encouraging and faithful.”

Even with these faithful role models, Helen Early was nevertheless surprised when her brother announced that he was transferring from Holy Cross College to Mater Christi Seminary in Albany to start studying for the priesthood.

“I was delighted for him, but I had never thought of him that way,” she said.

After that first semester of seminary, Bishop Clark attended St. Bernard’s Seminary in Rochester for two years before beginning three and a half years of study at the North American College and Pontifical Gregorian University, both in Rome. He was ordained a priest in Rome on Dec. 19, 1962.

As a seminarian, Bishop Clark forged close friendships with his fellow seminarians who served as camp counselors at the former Camp Tekakwitha in the Diocese of Albany. Bishop Clark first worked as a counselor there during the summer of 1957. Bishop Hubbard recalled that Bishop Clark had been assigned to lead the archery club, even though he had no archery experience. Bishop Hubbard acknowledged that he was similarly miscast in his own assignment as leader of the outdoor club, since he instructed his charges to sit down in a patch of poison ivy.

Later, when many of the Albany seminarians wound up studying together at North American College in Rome, they dominated their counterparts in soccer, with Bishop Clark manning the goal. Bishop Hubbard recalled how supportive Bishop Clark was when Bishop Hubbard’s father passed away during that time, and Bishop Hubbard was unable to travel back to the states for the services.

“He was very supportive to me as I went through that period of absence and grieving,” Bishop Hubbard said.

Bishop Clark also was there for support and celebration when Bishop Hubbard was ordained a bishop in 1977.

“He pledged his obedience and support wholeheartedly, and let me know he would be there for me,” said Bishop Hubbard, who was Bishop Clark’s “boss” for two and a half years, until Bishop Clark was named Bishop of Rochester in 1979.

Helen Early recalled May 1, 1979, when the family learned that her brother would become a bishop. Her mother was practically bursting with the news, but she could only tell her daughter to expect a phone call from her brother. Once the call was received, the rejoicing was tremendous, Helen Early said.

“We knew he had special gifts, but we were surprised because we didn’t think of these things,” she said. “He was happy with what he was doing. We never thought about the next step.”

Coincidentally, Helen Early and Grace Clark had returned just two weeks earlier from a trip to Rome to mark the end of Bishop Clark’s seven-year stint as a spiritual director at the North American College there. During the trip, they visited Assisi and Siena, and celebrated Easter in Rome.

As they prepared to return to Rome for her brother’s May 27 ordination as a bishop, a cousin offered to stay at Helen Early’s home to watch her five girls, who ranged in age from 3 to 11, so she, her mother and her husband could go.

The highlight of the trip was meeting Pope John Paul II, who asked Helen Early who was older: her husband or Bishop Clark?

“He was so down to Earth,” she said of the pope.

The whirlwind didn’t stop when the group returned to New York. The new bishop was greeted by his nieces and members of the local media. There were celebrations in Albany and Rochester, and many family members traveled to Rochester for Bishop Clark’s June 26 installation, at which Bishop Hubbard served as master of ceremonies.

“Those were very special moments for him and it was a great honor for me to be involved in a very special day in his life,” Bishop Hubbard said.

Hastings, who was 11 at the time her uncle was installed as bishop, said the event was very exciting.

“I just remember going into that arena (the Blue Cross Arena, then known as the War Memorial),” Hastings said. “It was huge. There were so many people there, it was hard to comprehend that they were all there to celebrate Uncle Matt.”

In the years since his ordination and installation as bishop, Bishop Clark has frequently included anecdotes about his nieces and their families in his “Along the Way” column. Helen Early said the family has enjoyed getting his take on his nieces’ escapades and stories.

She said she sometimes would tell her daughters to call their uncle if they were sorting out teenage dilemmas or needed advice. His response was never “I would …” or “I think you should …” but instead he was able to help each niece discern on her own what she should do, said Kathleen Early, the bishop’s youngest niece.

“Afterwards, I’d get a phone call from him saying, ‘Thanks a lot for that,'” Helen Early joked, mimicking Bishop Clark’s exasperation.

Like Bishop Clark’s nieces, Bishop Hubbard said he has relied often on his friend and brother bishop being just a phone call away.

“It has been a tremendous source of support and consolation to be able to pick up the phone and say, ‘This is happening in the church in general, or in the bishop’s office, or in the diocese. What’s your take? How do you plan to address this or that issue?'” he noted.

Niece Jane Early said one highlight for her of her uncle’s time as bishop was when he was invited to confirm her daughter alongside Buffalo’s Auxiliary Bishop Edward Grosz last year in Batavia, which is in the Diocese of Buffalo.

“To see him confirm my daughter was a really special thing for me because it marks her faith transition into adulthood,” Jane Early said.

Hastings said she was able to witness her uncle’s strong faith in action during seven trips she took with him to Brazil and Chile to tour diocesan missions. Despite her uncle’s humility, many people were starstruck to meet “Dom Mateo,” and they bowed or wanted to kiss his ring, she said.

Hastings said she looks forward each year to being on hand when her uncle presides at midnight Mass at Sacred Heart Cathedral on Christmas Eve and celebrates Mass the next day for inmates at Monroe County Jail.

“That’s a different experience than midnight Mass, and it certainly humbles you,” Hastings said.

As it does her uncle, she noted.