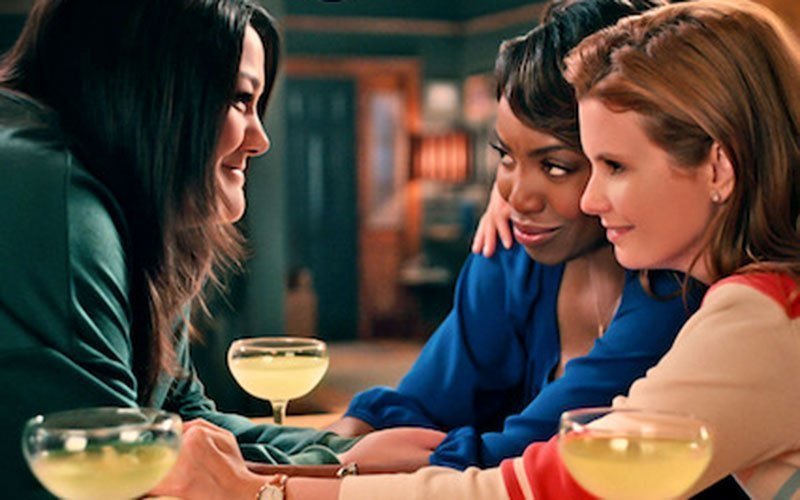 This is the TV poster for the Netflix series "Sweet Magnolias." (CNS photo by Netflix)

NEW YORK (CNS) — The problems are manageable and the characters generally sympathetic in the pleasantly enjoyable, though slightly bland, series “Sweet Magnolias.” Ten hourlong episodes of the drama, created by Sheryl J. Anderson, are currently streaming on Netflix.

As adapted from a series of romance novels by Sherryl Woods, the unsteamy soap opera revolves around the friendship shared by a trio of women in fictional, picturesque and aptly named Serenity, South Carolina.

Maddie gets support from childhood pals Helen Decatur (Heather Headley), a no-nonsense lawyer, and chef Dana Sue Sullivan (Brooke Elliott), the owner of an eponymous local restaurant. Both of them, however, have challenges of their own.

Helen is still in search of Mr. Right and yearns to be a mother. Dana Sue has a mildly rebellious teen daughter, Annie (Anneliese Judge), to contend with, as well as the machinations of Brad (Adam Fristoe), the no-goodnik sous chef she feels compelled to fire early on in the proceedings.

On the upside, the friends have a plan to go into business together. Helen has purchased a stately old house that they hope to turn into a luxurious spa. Once it’s up and running, Maddie will be in charge of marketing while Dana Sue will run the cafe.

The show is thoroughly congenial fare for believers. Regular churchgoing, for instance, is portrayed as an accepted aspect of life. Thus all the major characters, young and old, foregather at the house of worship presided over by Pastor June Wilkes (Tracey Bonner), whose preaching stresses the importance of community.

Based on the three episodes reviewed, the program’s underlying values are also in good order. The damage wrought by Bill and Noreen’s affair, for example, is explored in some depth.

Ty’s performance on the mound suffers as a result of his parents’ breakup and his resentment of his dad’s waywardness. And, in a memorably poignant scene, Bill, with Noreen sleeping beside him on their couch, regretfully scans photos of his now-broken family on his cellphone.

Brad aside, moreover, none of the characters is an unredeemable villain. Noreen may be emotionally tone deaf when it comes to shouting loud support for Ty from the bleachers. But she offers sensitivity and good advice to insecure Kyle as he copes with his secret crush on Annie.

Catholic viewers may be somewhat unsettled by the distant prospect of a second marriage entailed by the bond Maddie begins to form with Ty’s buff coach, Cal (Justin Bruening). (As with Helen’s tart-on-the-surface relationship with Brad’s replacement as sous chef, Erik, played by Dion Johnstone, this romance can be seen coming from a mile away.)

But Maddie is, at least, the wronged party. And there’s no predicting future plot turns.

Its mature themes, together with dialogue marked by the occasional mild oath and a single crass expression, make “Sweet Magnolias” unsuitable for little kids. But small fry are unlikely to take an interest in the fate of Maddie, Helen and Dana Sue anyway.

Teens and grown-ups, by contrast, may find in the old-fashioned life of Serenity the 21st-century equivalent of the refuge once offered by Andy Griffith’s Mayberry. To paraphrase the theme song of another series of roughly the same vintage, having found Serenity, they’ll will likely want to “set a spell.”