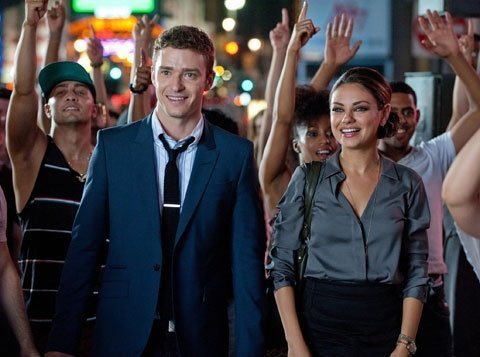 NEW YORK (CNS) — Viewers familiar with the slang phrase "Friends With Benefits" (Screen Gems) will pretty well know what to expect from the central relationship in director and co-writer Will Gluck’s thoroughly unromantic romantic comedy.

And, indeed, this story of two newfound pals who make a pact to maintain their friendship while also sharing commitment-free, emotionally uninvolved sex entirely fulfills such expectations. The result, need it be said, is neither friendly nor beneficial.

The buddies in question are Jamie (Mila Kunis), a successful New York headhunter, and Dylan (Justin Timberlake), the formerly L.A.-based art director she recently recruited for a job in Gotham.

Dylan’s new employer is Sports Illustrated, and we’re meant to be tickled when, practically on arrival for his first day of work there, he’s invited on a gay debauch by out-of-the-closet and in-your-face colleague Tommy (Woody Harrelson). For all his self-acceptance, Tommy, it seems, has yet to liberate himself from the cliched assumption that all artsy men must be light in their loafers.

But back to our hotshot heterosexuals. Though both are doing well professionally, the opening scenes have demonstrated Jamie and Dylan’s shared frustration with the urban dating scene, thus paving the way for the titular arrangement. Since "sometimes you just need it," they agree, sex should be approached "like tennis."

Inevitably, the script — on which Gluck collaborated with Keith Merryman and David A. Newman — brings the pair somewhat to their senses on this score. But not before treating the audience to excessively detailed bedroom scenes and dialogue replete with obscenities.

Nor does the eventual nod to true love compensate for a frivolous view of human sexuality that embraces not only the main duo’s initial experimentation and Tommy’s blithely referenced lifestyle, but the played-for-laughs promiscuity of Jamie’s mom, Lorna (Patricia Clarkson).

e — never can seem to remember which of her innumerable partners was, in fact, Jamie’s father. Lost amid all this carnal chaos is some occasionally witty patter and a stab at seriousness from Richard Jenkins in the role of Dylan’s Alzheimer’s-afflicted dad.