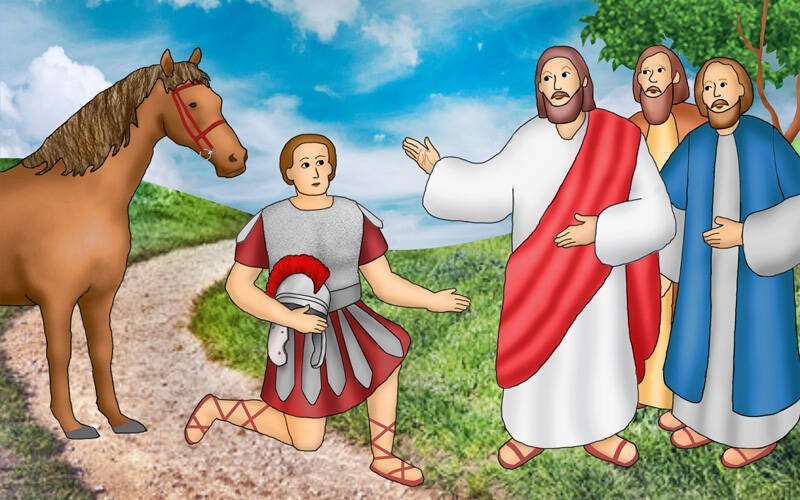 One day, Jesus and the apostles traveled to Capernaum. When they arrived, Jesus was approached by a centurion.

“Lord, my servant is lying at home paralyzed, suffering dreadfully,” the centurion said.

Jesus looked at the man.

But the centurion did not want Jesus to come to his home.

“Lord, I am not worthy to have you enter under my roof; only say the word and my servant will be healed,” he said. “For I too am a man subject to authority, with soldiers subject to me. And I say to one, ‘Go,’ and he goes; and to another, ‘Come here,’ and he comes; and to my slave, ‘Do this,’ and he does it.”

Jesus was amazed by the centurion’s response. He looked at the people who had followed him to Capernaum.

“Amen, I say to you, in no one in Israel have I found such faith,” Jesus said. “I say to you, many will come from the east and the west, and will recline with Abraham, Isaac and Jacob at the banquet in the kingdom of heaven, but the children of the kingdom will be driven out into the outer darkness, where there will be wailing and grinding of teeth.”

Jesus turned to the centurion.

“You may go; as you have believed, let it be done for you.”

At that very hour, the centurion’s servant was healed.

After healing the centurion’s servant, Jesus entered the house of Peter, one of his apostles.

Jesus saw Peter’s mother-in-law, who was in bed with a fever.

Jesus went over to the bed and touched the hand of Peter’s mother-in-law. The fever left her immediately, and she rose from the bed and waited on Jesus and his friends.

The acts of healing that Jesus performed fulfilled a prophesy about the Messiah that is found in the Old Testament Book of Isaiah: “He took away our infirmities and bore our diseases.”

1. Who asked Jesus to heal his servant?

2. Where did Jesus heal the servant?

TRIVIA: Who did Jesus heal before he healed the centurion’s servant? (Hint: Matthew 8:2-1)

In Acts 10, we can read about Cornelius, a devout, God-fearing centurion who lived in Caesarea.

One day, Cornelius saw an angel of God in a vision. The angel told him to send some men to Joppa to summon Peter, who was staying there.

The next day, Peter had a vision. A voice told him three times to kill and eat animals. Peter refused because he never ate anything unclean, but the voice said, “What God has made clean, you are not to call profane.”

When Cornelius’ friends arrived, the Holy Spirit told Peter to go with them.

“You know that it is unlawful for a Jewish man to associate with, or visit, a gentile, but God has shown me that I should not call any person profane or unclean,” Peter told Cornelius and his family and friends upon arriving in Caesarea. “Rather, in every nation, whoever fears him and acts uprightly is acceptable to him.”

Peter then spoke about Jesus. The Holy Spirit fell upon the people, and they were baptized in Jesus’ name.

Paula di Rosa was born in Italy in 1813. She left school at age 17 to keep house for her father, who owned a textile mill.

She also cared for the girls who worked in the factory. With the help of a local widow, she nursed them back to health during a cholera epidemic.

Paula later established a military hospital and a house for poor, abandoned girls. Her works of charity evolved into the founding of an order called the Handmaids of Charity, which the Vatican approved in 1850. Paula made her vows as Mary of the Crucified in 1852, and she established two convents in or near other Italian cities.

She died at her home in Brescia after collapsing from physical exhaustion in 1855, and we remember her on Dec. 15.

As you have believed, let it be done for you.