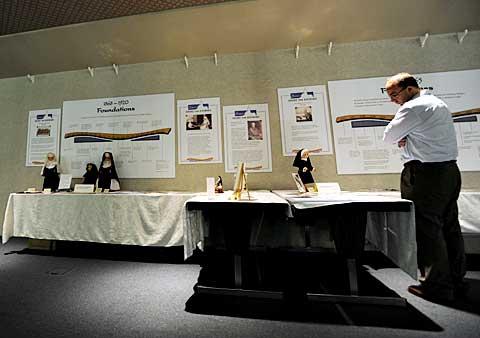 An exhibit celebrating 175 years of good works by area women religious is currently on display at Rochester's St. Mary Church. Above, a visitor looks at the exhibit May 4.

In 1870, Rochester residents were in an uproar.

Sister Superior Hieronymo O’Brien, a Sister of Charity of Emmitsburg who had become beloved for leading the founding of Rochester’s first hospital, St. Mary’s, had been transferred to New Orleans.

Bishop Bernard J. McQuaid, Rochester’s first bishop, invited Mother Hieronymo — as she was known locally — to join the Rochester Sisters of St. Joseph and return to the city upon the expiration of her annual vows in 1871.

Upon her return, Mother Hieronymo got right back to work. She helped found a Home of Industry that provided a home to young women without families and employment in sewing, tailoring and embroidering before they were old enough to live on their own. In the 1870s, the home began to welcome elderly women as permanent residents, and it became the forerunner of St. Ann’s Home, which is now part of St. Ann’s Community.

Mother Hieronymo’s story is one of many highlighted in the exhibit "Sisters Share the Journey: Women Religious in the History of Rochester," which will be on display at the Dugan Center at St. Mary Parish, 15 St. Mary’s Place, Rochester, May 1-16.

The exhibit, which was planned to help mark the 175th anniversaries of the City of Rochester and St. Mary Parish, celebrates the contributions of women religious to the city, St. Mary and the Diocese of Rochester as a whole.

"I’ve been thinking for a couple years, as I look out at the congregation and see sisters there, what can we do to honor and acknowledge them?" said Anne-Marie Brogan, St. Mary’s pastoral administrator.

The exhibit will be open from 9 a.m. to 1 p.m. Sundays, from noon to 1:30 p.m. weekdays or by appointment by calling 585-232-7140. Bishop Matthew H. Clark will celebrate a special Mass giving thanks for the ministry of the sisters at 4 p.m. Saturday, May 15, at St. Mary, followed by a reception in the Dugan Center. There is no admission fee. The parish also is hosting brunch after exhibit hours May 2 and will have evening prayer at 7 p.m. May 26 to conclude the parish’s 175th-anniversary celebrations.

"I think it’s wonderful," said Sister Jeanne Reichart, archivist for the Rochester Sisters of Mercy, which is a part of the Sisters of Mercy of America’s New York, Pennsylvania and Pacific West Communities. "I think it’s an excellent idea. A great deal of effort has been contributed to put it together, and the religious communities contributed a great deal to Rochester."

The exhibit includes a timeline, photographs of events that took place at St. Mary Church and such artifacts as lace produced by St. Mary’s industrial school, Brogan said.

Among its artifacts, the exhibit also includes photocopies of documents from the beginnings of St. Mary’s Orphanage for Boys, a school tuition card written in German and an eighth-grade diploma written in Polish.

"(The exhibit) should bring back memories for people and it should make us feel proud of what the church has accomplished in the city over the years," Brogan said.

"One of the points that the (organizing) committee wanted to make is the way the work of the sisters has expanded over time," said Kathy Urbanic, archivist for the Sisters of St. Joseph of Rochester. "In the early days, they were focused on education, but over time, the sisters have moved on to many others areas."

"Even today the sisters have a great history of doing the groundwork to get an institution going, and it sometimes gets to the point where it can be handed over to others — often to an independent board," Urbanic said.

Brogan noted that even to this day, area sisters are still beginning new ministries. For instance, in 2009 the Sisters of St. Joseph collaborated to start Nativity Preparatory Academy, a college-preparatory school for middle-school-aged students in need.

"The sisters are still adapting to needs as they arise, most often dealing with people in the margins," Brogan said.