From Paris With Love - Catholic Courier 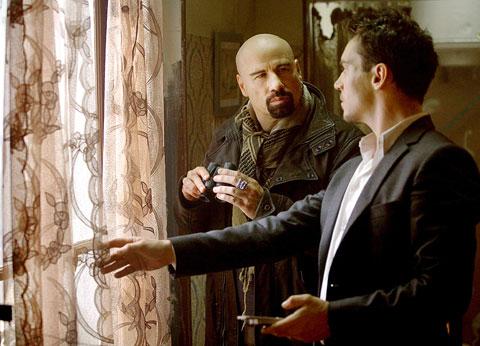 NEW YORK (CNS) — Though at times it tries to pass itself off as a cautionary tale with serious moral overtones, the espionage thriller "From Paris With Love" (Lionsgate) for the most part registers instead as a straightforward buddy movie, and a gleefully violent one at that.

The initially ill-matched partners at the center of the story are Paris-based American diplomat and low-level CIA agent James Reese (Jonathan Rhys Meyers) and Charlie Wax (John Travolta), a trigger-happy visiting operative Reese has been instructed to escort and assist.

Despite his aspirations to be a real spy, Reese’s previous intelligence work has been confined to activities like changing the license plates on agency autos to prevent their being traced. So at first he looks forward to this latest assignment as a chance to break into the big leagues.

But Wax proves far more of a loose cannon than the buttoned-up Reece had bargained for, and Wax’s wild pursuit of drug dealers and terrorists sees the pair cutting a bloody swath through the French capital’s criminal underworld.

Bewildered as the bullets — and the bodies — fly, Reese pauses briefly to wash telltale gore off his face and stare glumly into the mirror, wondering about it all. But the next moment he’s off again, one step behind Wax on their renewed rampage.

Reese’s prolonged absence from home leads to friction with his live-in Gallic girlfriend Caroline (Kasia Smutniak). Her somewhat surprising depth of devotion has been signaled earlier by a scene in which she proposed to Reese, presenting him with a wedding-bandlike ring that, so she explained, had once belonged to her father.

Domestic tranquility suffers a further setback when Caroline, shopping for dress material in a depressed neighborhood she wouldn’t normally frequent, spots Reese and Wax getting into an elevator with a streetwalker in tow.

Though Reese ultimately has nothing to do with this shady lady the newly minted pals have picked up in their travels, Wax and she share an encounter in a bathroom raucous enough to be audible both to Reese and to the audience.

While, as directed by Pierre Morel, the dialogue in Adi Hasak’s F-word-heavy script is occasionally amusing, this hardly compensates for the fact that the film — based on a story by Luc Besson — glamorizes Wax’s utter disregard for the lives of those on either side of the law, unmistakably relishes the mayhem that results and presents that tawdry restroom coupling as just another of Wax’s endearing madcap adventures.

The film contains constant, sometimes bloody action violence, off-screen sexual activity with a prostitute, cohabitation, drug use, a couple of profanities and pervasive rough and much crude language. The USCCB Office for Film & Broadcasting classification is O — morally offensive. The Motion Picture Association of America rating is R — restricted. Under 17 requires accompanying parent or adult guardian.