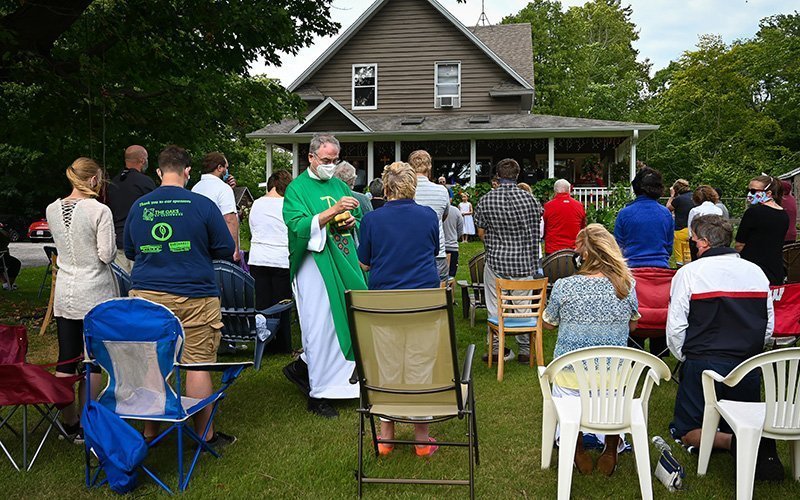 WASHINGTON ISLAND, Wis. (CNS) — Life on a remote island ebbs and flows, much like the unsettled waters surrounding it.

Larry and Diane Kahlscheuer, residents of Lake Michigan’s Washington Island since 1987, have successfully navigated those unsettled waters by relying on their faith as an anchor, especially during the coronavirus pandemic.

The Kahlscheuers, members of Stella Maris Parish in Egg Harbor, have lived out their faith six miles from the mainland and have helped fellow island Catholics do the same.

Even though Catholic settlers — fishermen of Irish descent — have occupied Washington Island since the 1860s, it has no Catholic church. Since the early 1900s, Mass has been celebrated in homes and, during summers between 1910 and 1966, at a community center on Gissalson Beach.

A store on Washington Harbor was turned into St. Michael Chapel in 1966 and served the island Catholics until 1983, when Trinity Evangelical Lutheran Church opened its doors for summer Sunday Masses. When the pandemic hit last March, Trinity Lutheran, like other churches, closed its doors and began offering virtual services.

In May, when Bishop David L. Ricken of Green Bay announced that parishes would begin holding Communion services, the Kahlscheuers asked their pastor, Father Tom Farrell, if he could offer the services at their home. And in June, when the diocese announced resumption of public Masses at 25% church occupancy, they began hosting outdoor Sunday Mass in their yard with restrictions on social distancing.

“Father Tom did go to the diocese and received permission to do outside Mass and that’s what we have done since June. People who have come have enjoyed it immensely,” said Larry Kahlscheuer. “Because we have no facility up here, the options were to get on the boat, travel (across Lake Michigan for Mass in Sister Bay) and then come home. Not everybody is able to do that.”

The Kahlscheuers erected a portable altar on their front porch for Father Farrell to celebrate Mass.

“Those in attendance bring their own lawn chairs or blankets and sit on the grass,” said Larry. “Part of the diocesan guidelines is the taking of temperatures and a little squirt of hand sanitizer. The priest, during Communion, is sanitized and he distributes Communion. It’s all done (with) the strictest guidelines. People social distance, except for families, on our front lawn.”

Mass attendance this summer has ranged from a handful to a yard full of people, said the Kahlscheuers. On Sept. 6, about 80 people attended Mass, including Tilly and Tug Gunnlaugsson and Erik Becerra, who celebrated their first Communion.

The Kahlscheuer home not only serves as a temporary site for Sunday Mass, it is also home to a tabernacle where the Blessed Sacrament is reserved.

“When Bishop (Robert) Banks was bishop, he knew and understood the difficulties of living on an island and trying to maintain a Catholic presence and allowed us to house the holy Eucharist at our home in a tabernacle,” Larry told The Compass, newspaper of the Diocese of Green Bay. “Bishop Ricken came to the island a couple of years back and said Mass for the community.

“We stopped at home and I showed him where we have the tabernacle and asked if any changes needed to be made because we wanted to do things as proper as possible. He said, ‘I think you’ve got it covered.'”

Larry and Diane said they know what an honor it is to have the Blessed Sacrament reserved at their home.

“Because of the presence of the Eucharist, we normally do offer for people in this community to come into our house and sit with the Eucharist and pray and meditate as often as they can — and as much as it works for us, too,” added Larry. “So that’s been an added blessing.”

The Kahlscheuers said the pandemic has been a challenge for their community, but it also has helped them to understand how important faith is to them.

“This whole COVID-19 situation, during the entire time when churches were shut down, I realized just how much the Eucharist meant to me and how much being fed by word and bread meant to my faith life,” said Larry. “I’m a believer that I became stronger during this time. It’s been quite a nice walk to go through despite what this whole situation is about.”

“It’s like seeing people in your community in all different emotions, some still not feeling they can come back, and others who are there. They are telling us, ‘This is the first time being to Mass in five months,'” said Diane. “The comments are just very powerful. Just looking out and seeing people on our front lawn and seeing their emotion, it’s just a sacred thing.”

Lucero is news and information manager for The Compass, newspaper of the Diocese of Green Bay.