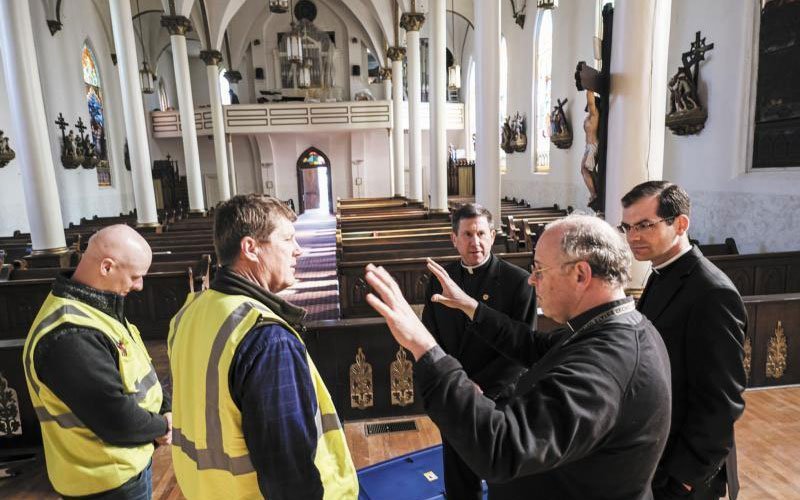 Bishop J. Mark Spalding of Nashville, Tenn., center back, listens March 4, 2020, as Father S. Bede Price, pastor at the Church of the Assumption, talks about the damage to the building caused by a tornado that hit Nashville's historic Germantown neighborhood and crossed the state, killing at least 24 people. (CNS photo by Rick Musacchio/Tennessee Register)

NASHVILLE, Tenn. (CNS) — At the Church of the Assumption in Nashville’s Germantown neighborhood, the pastor, Father S. Bede Price, was asleep in the rectory when a massive tornado roared through the neighborhood in the early morning hours of March 3.

He was roused by the sound of an exploding electrical transformer behind the church and the building shaking as the storm passed.

He ran outside and saw the destruction in the street. “My first thought was that a plane had crashed,” he said.

Then the chimney of the rectory smashed onto the sidewalk near where he was standing, and he realized something else was going on.

As he started checking the church, he saw that several stained-glass windows had been blown out or were broken, including one near the altar, with only a picture of the face of the infant Jesus surviving the damage.

The tornado also ripped a hole in the back wall of the sacristy and had blown vestments and other items around the room.

The tabernacle also had been blown open, so Father Price removed the Blessed Sacrament and transferred it to a safe place in the rectory.

The damage to the church, built in 1859 and one of the oldest in the diocese, is extensive. Besides the damaged stained-glass windows, part of the west wall collapsed. The powerful winds of the tornado shifted the position of the roof, which caused damage to the walls of the church. The steeple is tilted and will need to be repaired.

However, the altar and much of the art in the church were spared.

A full assessment of the damage and the repairs needed are still under way, but the church likely will not be usable for quite some time.

The rectory, the Buddeke House across the street, and the Father Bernard Hall next to the church all suffered minor damage but are still usable.

Assumption suffered, by far, the most extensive damage of any church in the diocese in the wake of the tornado. “They’re number one on the list,” said Deacon Hans Toecker, chancellor of the Nashville Diocese. “It’s going to require extensive renovation and repairs.”

The parish has received permission from the diocese under Canon 933 for the Masses to be celebrated in a church building of a non-Catholic Christian community.

Across the Nashville metro area, homes, churches and businesses were damaged or destroyed in the March 3 tornado. For some, all that is left is a pile of rubble. Others, reduced to a concrete slab, have even less remaining.

But within minutes after the tornado passed, Catholics joined the rest of the community to offer help and hope to those hit the hardest.

In the Diocese of Nashville, Putnam County had the greatest loss of life when the tornado, at its strongest point, touched down near the town of Baxter, just west of the county seat of Cookeville. Eighteen people were killed; among the victims were children as young as 3.

There were 24 deaths. Outside of Putnam County, three deaths were in Wilson County, two in Davidson County and one in Benton County.

Pastors, parish staff and fellow parishioners across the diocese quickly sprang into action, checking to make sure everyone in their communities were safe and trying to determine what the families hit hardest might need.

Catholic Charities of Tennessee began working with Metro and other community organizations to assess the needs of the people hurt by the tornado and planning long-term assistance.

The Knights of Columbus jumped in with a promise to raise funds and materials to help as well as offering their hands to do the hard work of cleaning up.

Holy Rosary Church, spared any damage to its facilities from the tornado, opened its doors to its neighbors in the Donelson community. Holy Rosary became a Red Cross shelter for families who lost their homes.

Other parishes, such as Holy Name, Assumption, St. Stephen in Old Hickory and St. Thomas Aquinas in Cookeville were busy in the days after the tornado offering material and moral support for their neighbors in need.

And individual Catholics from across the diocese jumped up to offer their help wherever and whenever they were needed.

Editor’s Note: Donors are encouraged to give online through www.dioceseofnashville.com or www.cctenn.org/donate.cfm.

Contributing to this story were staff members of the Tennessee Register, newspaper of the Diocese of Nashville.