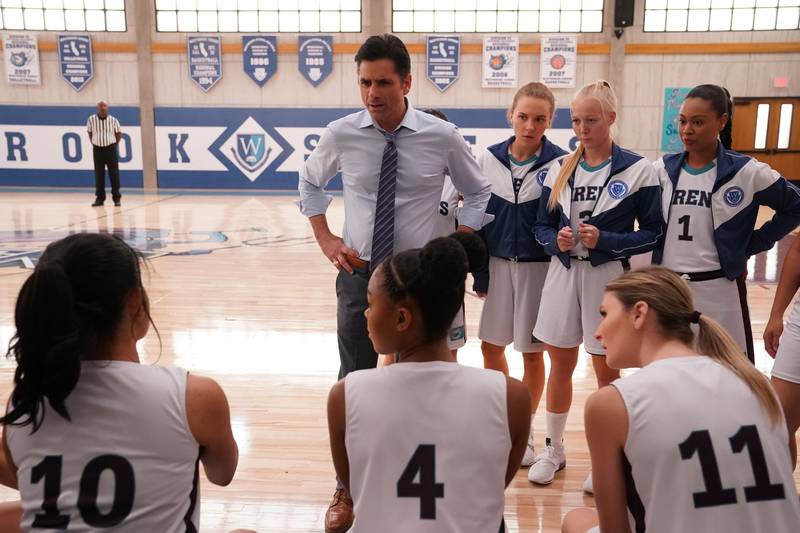 NEW YORK (CNS) — While its tone is mostly upbeat, the presence of some mature and ethically dubious material means the sports-themed blend of comedy and drama “Big Shot” (Disney+) is not for little ones.

In fact, parents will want to consider carefully before allowing even the teens at whom the show is primarily aimed to watch it.

Despite an impressive record, volatile college basketball coach Marvyn Korn (John Stamos) finds himself out of a job after clobbering a referee with a chair thrown from the sidelines. With no prospect of securing a comparable position, at least for the time being, toxic Marvyn reluctantly takes the helm at a private high school for girls in California.

Predictable growing pains result from his lack of sensitivity and he initially flounders, despite the guidance he receives from his levelheaded assistant coach, Holly Barrett (Jessalyn Gilsig). The pilot episode screened finds him in conflict with the school’s assertive dean, Sherilyn Thomas (Yvette Nicole Brown), and its most important donor, Lucas Gruzinsky (Dale Whibley).

As the plot follows a tried-and-true path, themes touched on include Marvyn’s excessive concentration on his work to the exclusion of all other considerations. This has led to the breakdown of his marriage and currently causes him to demonstrate mild neglect toward his adolescent daughter, Emma (Sophia Mitri Schloss).

Touchingly, Emma responds not with alienation but by reaching out to her dad via supportive, nurturing late-night phone calls. She thus reverses roles, taking on the burden of a parent.

Marvyn also struggles to find the right balance in his relationship with Lucas’ daughter Louise (Nell Verlaque), his squad’s star player. Benched for a lack of respect, Louise has to find the right reason to convince Marvyn to let her play while he has to weigh the importance of the lesson he’s trying to teach her against the welfare of the team as a whole.

Skillfully crafted montages of action on the court keep the show’s pace rapid. And the appealing good intentions of its characters help paper over its lack of an original story line. In other respects, however, the series gets off to a shaky start.

The dialogue not only contains a handful of crass terms but discussion of the fact that Holly, who is also divorced, cheated on her husband. This is, however, properly presented as a serious and damaging moral failure.

More ambiguously, the script also refers to a sexual advance that one of the students may or may not have made toward another. Such “confusion,” Holly subsequently asserts — with a shrug of her shoulders — is usual for girls of their age.

Holly also maintains that “exploring” and “experimenting” are best engaged in during high school because teachers can then guide, and contain, the emotional outcome. Viewers committed to biblical values will, of course, find such reasoning skewed at best.

Acceptable for adults, “Big Shot” is too imbued with contemporary mores to be recommended for impressionable TV fans.