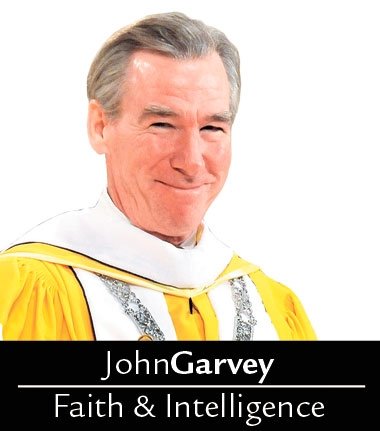 At the end of June the Congregation for Saints’ Causes recognized the life of Archbishop Fulton J. Sheen as one of heroic virtue and granted him the title "venerable." It is a step toward beatification. He now needs a miracle attributed to his intercession to proceed.

He was a force of nature. By 1940, in addition to his classes, he was meeting 150 speaking engagements per year. He also did the "Catholic Hour" radio show to which he first owed his celebrity. It was heard by millions from 1930 to 1950. Evangelist Billy Graham called him "one of the greatest preachers of this century." Catholic Church historian Msgr. John Tracy Ellis said Archbishop Sheen was the 20th-century’s most famous Catholic preacher.

In 1951, Archbishop Sheen began his television career. His half-hour ABC show, "Life Is Worth Living," was a media sensation. The archbishop would talk straight through the show with no notes, no props — except his blackboard.

My earliest memory of television is sitting at my great-grandparents’ home on Sunday evening, watching that program in black and white with my great-uncles and -aunts. Archbishop Sheen won an Emmy for Most Outstanding Television Personality, besting Edward R. Murrow, Lucille Ball and Arthur Godfrey.

It’s hard to imagine someone like Archbishop Sheen even appearing on television today, let alone winning an Emmy. Some might say he couldn’t measure up to modern shows in entertainment value. I doubt this. I think it has more to do with the changed expectations of television audiences or producers. The archbishop’s show demanded more of the viewer than today’s programs, which viewers watch to be entertained or titillated (notice the passive voice).

Compare this to a program Archbishop Sheen did in 1956 about gloom as a neurosis. He discussed the theme of despair in modern literature. He reminded viewers how French existentialist writer Jean-Paul Sartre’s "No Exit" ends with the observation that "hell is other people," and observed that the intense egotism of such works leads to a curious kind of self-pity.

"Life is Worth Living" also came with a distinctive point of view. Archbishop Sheen argued for objective moral standards in society and maintained a certainty about religion. He condemned Josef Stalin and communism, famously presaging the Soviet leader’s death one week before it happened. He denounced racism and the excesses of capitalism.

In today’s television scene, the only permissible philosophical premise is that each person has his own truth. What’s right or good for me may not be right or good for you, and that’s OK. In a world governed by this assumption, the only necessary virtue is tolerance; and the only vice is hypocrisy.

A prophet like Archbishop Sheen would be out of place in such a world. Preachers like him appeal to people who think their lives have a meaning, that life’s questions have true and false answers. Someone who is actively searching for those answers, not passively waiting to be entertained, will find real value in a half-hour of conversation with a thoughtful guide. And Archbishop Sheen earned his popularity, I think, by paying his viewers the compliment of supposing that that’s what they were looking for.

Garvey is the president of The Catholic University of America in Washington.)