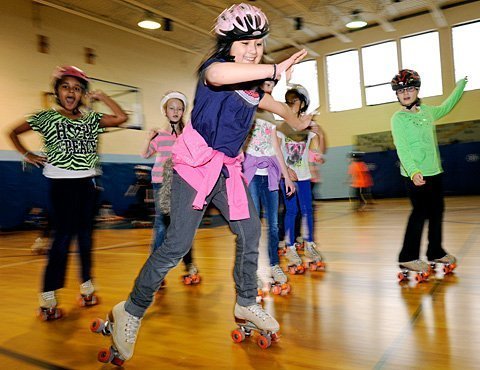 Science was made fun at Holy Cross School in Charlotte, where Tim Cawley of the Rochester Museum and Science Center offered a variety of demonstrations to the student body in the gymnasium. For starters, he had young volunteers come forward to pour such products as ammonia, dishwashing detergent, soda pop and lemon juice into separate glasses of red cabbage juice. The containers were then lined up according to color, so as to illustrate the pH scale that measures the acidity or basicity of a substance.

Olivia Jenkins, 6, a Holy Cross first-grader, said she was eager to volunteer for that presentation because "I’ve got a lot of energy and it looked really cool," although she acknowledged that she had a bit of difficulty inserting protective goggles over her glasses.

Ryan Lewis, 9, a fourth-grader, also gave a thumbs-up to the pH scale demonstration. In addition, he said he enjoyed observing a ping-pong ball spin around a cylinder on its own after being immersed in liquid nitrogen, as well as watching a cork blow loudly off a bottle after ethanol vapor inside it was ignited to simulate how a car’s combustion engine operates.

"I like that you can learn to create things and build stuff and mix stuff, and make things explode — stuff like that," Ryan remarked about his enjoyment of science.

Another crowd-pleasing moment occurred when Cawley applied a heat gun to a plastic jug, then blew on the container to form a crudely shaped bag. Cawley, noting the importance of recycling, pointed out that this mirrors how plastic bags are created from recycled objects. In his closing remarks Cawley encouraged students to embrace science in their curriculum, pointing out that we wouldn’t have video games, cell phones, and other modern pleasures and conveniences without the work of dedicated scientists.

While Holy Cross combined pleasure and learning, St. Lawrence School in Greece placed the emphasis squarely on fun Jan. 28 with a roller-skating event. Students appeared at the gym in shifts throughout the morning and afternoon, circling the floor to such songs as "Gangnam Style" and "Everybody Just Have a Good Time" and even dancing in place to "The Hokey Pokey" with varying degrees of expertise.

Many St. Lawrence skaters glided effortlessly, whereas others … well, suffice it to say that helmets were required for a good reason as youngsters dealt with the many ups, downs, thrills and spills of skating. Some folks graciously offered their hands to those who took tumbles, while other skaters were too busy busting fancy moves to notice the casualties.

Ava Basset and Samantha Brescia, both 8, said they felt fairly safe during the girls’-only skates, whereas roller-skating became more of a contact sport when they were joined on the floor by male classmates. Despite the occasional dangers present, Ava said she much preferred skating over her normal Monday schedule.

"You get to have fun and don’t have to be in classes," Ava said.

Also harboring no guilt about missing the classroom was Samantha, a fellow third-grader.

"We always learn stuff, and that’s awesome, but sometimes you just need to get away and have fun," she commented.