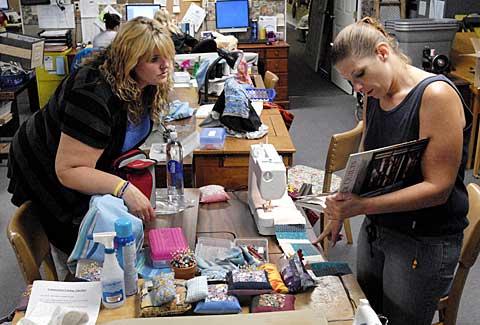 Linda Richards (left), a retail manager for the Connections program, looks at a quilt pattern with a client Aug. 12 in Mount Morris.

MOUNT MORRIS — After about two months of renovations, staff members with Catholic Charities of Livingston County’s Connections program were looking forward to an August grand reopening of their gift shop, which features items handcrafted by women transitioning off public assistance.

Instead, the staff is now planning the store’s final sale.

Due to the economic recession, the Connections program has lost its major state and county funding, and staff of Catholic Charities decided to shut down the program.

"It was a perfect storm of losing our funding, and 60 days just wasn’t enough time to raise the money to keep going," said Mary Ann Thompson, program director of Connections.

The Connections program — which has helped more than 100 women transition from welfare to the workplace since it began operating as a full-time program about four years ago — trains women in sewing, quilting, knitting and other craft skills to make the handcrafted items sold in the Connections store at 51 Main St.

Connections participants also are taught employment and retailing skills as they run the Connections storefront and eBay store. Participants also learn life skills, including responsibility and dependability. As it stands now, the program requires about $150,000 a year to operate.

Catholic Charities of Livingston County’s Executive Director, Carlos Garcia, said he hopes that elements of the program can be reworked and repurposed for the future.

Thompson noted that participants were taught pride in seeing a job well done.

"It becomes the sense of, ‘I’ve accomplished something,’" Thompson said. "Someone said something to me like, ‘This is the first thing I’ve ever really finished.’"

Linda Richards, the retail director of Connections, said the program has helped more than 100 women transition from welfare to the workplace over the four years that it has been operating full time. Just this year, 11 participants have gotten jobs, she noted.

"We’ve had some very powerful success stories," Richards said. "We had a lady get a job after a felony, and she had no transportation. … (After getting a job,) she said her life has been completely turned around."

Prior to learning of the loss of funding, the Connections staff recently expanded the program by renovating the store and adding new product lines, including pet, baby and children’s products, greeting cards and repurposed craft supplies.

The Connections staff learned in early August that the program would have to close by October. The staff hopes to liquidate craft supplies and store furnishings by Sept. 25. Weekly closing sale hours are: 10 a.m. to 4 p.m. Monday, Tuesday, Wednesday and Friday; 10 a.m. to 7 p.m. Thursday; and 10 a.m. to 2 p.m. Saturday. Proceeds will go to Catholic Charities of Livingston County.

Thompson and Richards said they hope to stay involved with women transitioning off welfare even after the doors of Connections close.

"We can’t be reliant on governmental funding," Richards said she has learned from the experience. "We need to look to the community to see the value in what we are providing to support us because these are necessary services that are bettering participants’ lives and bettering participants as a whole."

Both volunteers and program participants said they were saddened to learn of Connections’ impending closing.

Volunteer Gail Erskine of Lima, a parishioner of St. Rose of Lima, said she first heard about the program from Thompson, who is a fellow member of the Genesee Valley Fiber Arts Guild.

"I’ve enjoyed it thoroughly," Erskine said. "I like the girls (participating in the program). They are a pretty good bunch."

Program participant Jennifer, whose last name was withheld to protect her privacy, said she has changed since she entered the Connections program and Chances and Changes, a Livingston County-based shelter for women fleeing domestic violence.

She said when she first came to Connections, she was not used to being around so many different people.

"I think I’m more confident," Jennifer said. "I’m not quiet, and I’m not intimidated by people."

Even though Jennifer will soon be leaving Connections to start paralegal studies at a local community college, she said she is sad that other participants won’t be able to take part in Connections.

"A lot of people could benefit from the program," she said.