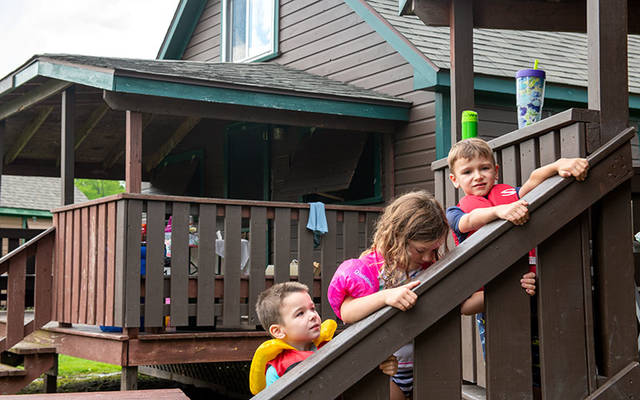 Campers gather near the cabins at Camp Stella Maris in Livonia July 23 during a camping trip with their families. (Courier file photo)

The COVID-19 pandemic dealt a devastating financial blow to Camp Stella Maris, but a new fundraising campaign hopes to soften it.

The new initiative, dubbed “143 for CSM,” asks camp alumni and supporters, as well as anyone who supports the camp’s work with youths, to make an online donation of at least $143 each to support the camp.

“The love that many collectively share for camp is a force to be reckoned with, a love that can be broken down into three simple numbers: 143,” said John Quinlivan, executive director of Camp Stella Maris.

“143 for CSM” is part of the camp’s CSM Forever Campaign, which will serve as a launchpad for several different efforts intended to ensure that the camp survives this “very challenging time” in its history, Quinlivan said. Camp Stella Maris was not able to offer its traditional summer camp program this past summer, and although the camp was able to rent its cabins to families for short-term stays, the income was significantly smaller than the amount the camp program typically generates, he said.

“Our summer camp programs account for 89 percent of our annual revenue, and the loss of those funds will have a lasting impact on camp. While we pivoted to family camping and have been able to cut expenses to the bare minimum, the loss is still projected to be over $500,000 for the fiscal year 2020,” he said. “We ask those who are able to and have an affinity for the work that we do at Camp Stella Maris to consider making a gift of any size.”

The second component of the CSM Forever Campaign is an online silent auction, which is slated to begin in early December. This auction will feature original artwork as well as memorabilia and other items related to Camp Stella Maris. More information will be posted on the camp’s Facebook page in the upcoming weeks.