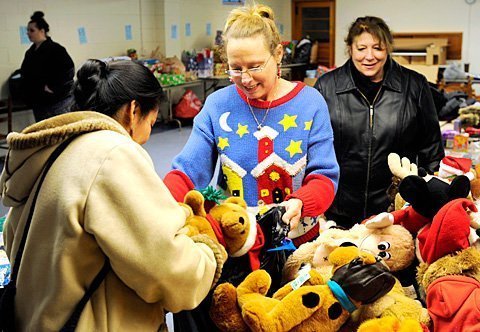 MOUNT MORRIS — This past fall, a mother of three who was low on funds paid her first visit to Catholic Charities of Livingston County. She was distraught at having never been in such a position — yet Tabitha Brewster, CCLC’s agency administrator, said the woman is far from alone in experiencing unprecedented need.

Thanks to funding from the Catholic Courier/Catholic Charities Christmas Appeal as well as a private donor, CCLC was able to provide the woman with a food basket and Christmas gifts for her family. Brewster reported that the woman, overwhelmed with gratitude, “pretty much broke down crying” upon returning to CCLC’s offices in late November to receive her holiday items.

The Christmas Appeal provides individuals and families across the diocese with short-term assistance that can’t be obtained through other sources. Meanwhile, CCLC’s Help*Works program — under the direction of Tammy Hall — offers similar emergency financial assistance for food, utilities, shelter, gasoline, medical and job-related needs, and child care. Help*Works serves more than 1,000 area families living at or below the poverty level, many of who are working poor or recently unemployed.

“Folks say, ‘I have a job, but don’t have steel-toe work boots.’ So we can get that,” Brewster said. “Or, ‘I don’t have the gas to get to my job until Thursday when I get paid.'”

Although Brewster said that “sometimes it’s an easy fix” to get people through rough financial spots, many other folks require more extensive attention. For them, CCLC offers education and counseling in such areas as budget management, energy conservation, navigating the social-services system, agency referrals, and moving toward new employment.

“Just to hook them up with other resources in the community — once that happens, we often do see that particular individual succeed,” Brewster said.

Brewster acknowledged that in her service region, personal success can at times be difficult to obtain. She said rural poverty is plentiful throughout Livingston County, with residents often facing limited employment and transportation options. “There have been times we’ve found individuals in the middle of nowhere, with very little food,” she noted.

Brewster said that once emergency services are provided, CCLC staff members strive to plant the seed for clients to move more toward self-sufficiency if at all possible.

“When they’re at their lowest moment, you show them you care and you want to help. And once you establish that, you’re able to say to them, ‘When are you going to make the change (to improve your life)?’ You have to want to do it, want to make the change,” Brewster stated, citing the example of a man whose association with CCLC began when he was just coming out of alcohol rehabilitation and needed to utilize the agency’s emergency-housing program. Six years later, he has a full-time job and apartment and is substance-free.

Catholic Charities has bettered the lives of Livingston County residents since 1992, when Sister Nancy O’Brien, RSM, became director of what was then know as the Rural Outreach at St. Patrick Church in Mount Morris. In 1995 it was replaced by a new regional office of Catholic Charities, which was located on Clinton Street and later Chapel Street before moving in 2009 to its present spot at 34 E. State St. Among CCLC’s additional offerings are emergency food, clothing and furniture; services to at-risk pregnant and parenting adult women and teens; trained adult mentoring for at-risk children; outreach to the Hispanic/Latino community; assistance with job transportation expenses; and transportation and home visits for the frail, elderly and disabled.

Brewster noted that in addition to receiving a portion of Christmas Appeal money, her agency relies on several streams of direct funding throughout the year so that CCLC programs can remain strong.

“We have great supporters in Livingston County. But we always need more. It really keeps us afloat,” she said.