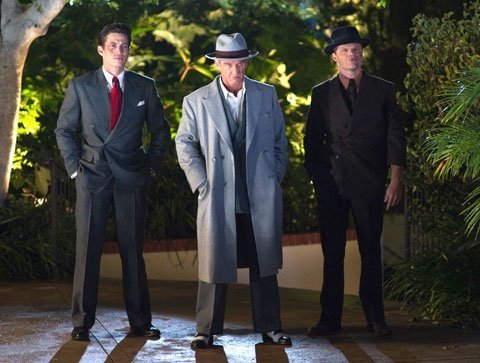 NEW YORK (CNS) — Early on in the stylish but excessively violent cops-and-robbers tale "Gangster Squad" (Warner Bros.), the villain of the piece — a reptilian gangster played by Sean Penn — has a rival chained to two cars which drive off in opposite directions, tearing the victim in half.

That’s a fair tipoff of the mayhem to come which, taken together with the film’s murky morality, makes this fact-based drama, directed by Ruben Fleischer, suitable only for the most stalwart adult viewers.

Penn’s baddie, Mickey Cohen, is a Brooklyn-bred ex-boxer intent on making 1940s Los Angeles his own. Out to stop him, by any means necessary, is the metropolis’ police chief, William Parker (Nick Nolte).

Along the way to a conclusive shootout that seems to reap as many casualties as a small-scale military operation, Wooters secretly romances — and straightforwardly seduces — Cohen’s good-hearted moll Grace Faraday (Emma Stone).

O’Mara and company occasionally express second thoughts about their methods. But screenwriter Will Beall’s script, adapted from Paul Lieberman’s eponymous book, presents their illegal actions as the only practical solution open to them.

Given Cohen’s ruthlessness — he eventually orders a machine-gun attack on O’Mara’s home, endangering the upright sergeant’s pregnant wife, Connie (Mireille Enos) — the audience is invited to react as viscerally as the characters to his seemingly unstoppable reign of terror. Moviegoers will require maturity and prudence to work through the tangled ethics of the situation — and a strong stomach to endure the wild gunplay and interludes of brutality.