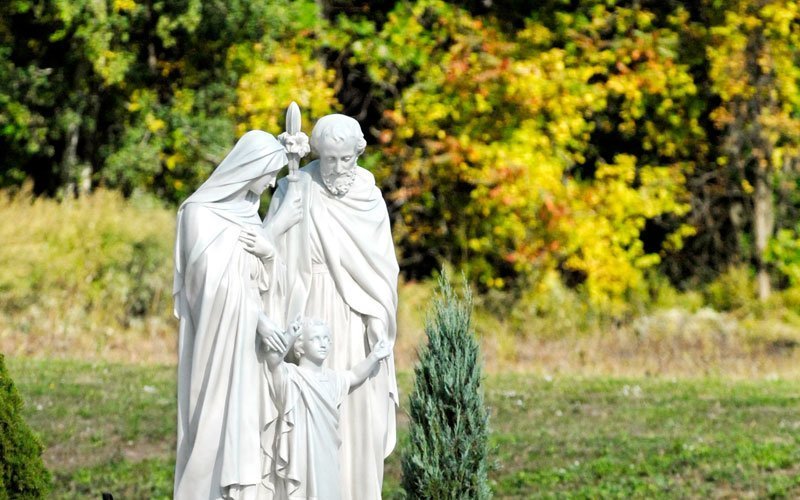 The recently installed statue of the Holy Family on the grounds of St. Jude the Apostle Church in Gates.

Many members of the parish family at St. Jude the Apostle in Gates came together this year to celebrate the parish’s 40th anniversary while paying a lasting parish tribute to another family — the Holy Family.

Over the summer parishioners landscaped an area on the western side of the church grounds and installed a large statue depicting Mary and Joseph holding the hands of young Jesus, who is standing between them. The statue is surrounded by a walkway of brick pavers as well as a colorful assortment of flowers and small bushes.

The beautification of the western part of the church grounds began several years ago, when a young parishioner hoping to become an Eagle Scout installed the brick walkway. But the idea for the shrine came from Father Michael Schramel, St. Jude’s pastor.

“For our 40th anniversary I thought it would be nice. I think the Holy Family is a good model for all of our parishioners,” he said.

Several months ago Father Schramel presented his idea to the parish pastoral council, which liked the idea. Most of the parishioners seemed to embrace the idea as well, and responded generously when asked for donations to cover the cost of the statue and the landscaping that would be done around it, Father Schramel said.

In just a few short months parishioners donated more than enough money to cover the cost of the landscaping and the $3,000 statue. The parish hopes to eventually install lighting at the shrine, and after that project is complete any leftover money will probably be used to enhance the parish grounds in other ways, Father Schramel said, perhaps by improving the lighting in the parking lot.

“Some of the outdoor capital things we just can’t fund with operating expenses,” he noted.

Even parishioners who didn’t contribute toward the project’s financial cost were able to take ownership of the project in other ways. For example, Father Schramel invited anyone interested to come to the parish one summer Saturday morning and landscape the area around the statue. That morning a whole crew of volunteers arrived at the parish ready to work, and they spent the day digging holes, shoveling dirt, planting shrubs and mums, and spreading mulch around the plants.

“It turned out very well. We didn’t hire anybody, and we did all the work,” Father Schramel said. “They did a very professional job on the whole thing, but it was all completed as a result of literally the time, talent and treasure of the parishioners.”

The end result of all this work, he added, is a beautiful shrine in a park-like setting on the parish’s already-gorgeous grounds and a valuable parish asset already being enjoyed by parishioners. In the nice weather Father Schramel has noticed parishioners reclining and reflecting in the sunlight on the bench before the shrine, and a flock of Canada geese seems to have adopted the shrine and the pond nearby.

“People have really embraced it. The community has really enjoyed it. People like the fact that it’s outside and they can just be outside and be reflective,” he said.

As successful as this project has been so far, it’s still not quite complete, however. Parishioners are still planning to add lighting and more bushes and flowers around the shrine next spring, and the Knights of Columbus have expressed interest in developing a mulch trail nearby with outdoor Stations of the Cross, Father Schramel said.

“There’s a lot more to be done yet. Now we’re going to continue to work on developing that space,” he said.

“It’s the place where the community gathers and celebrates its life of faith, and there are many ways we celebrate that faith. Certainly in the Eucharist, but also as we share the gifts that we have, and some of (those gifts) are digging holes and mowing lawns,” Father Schramel said, noting that parishioners do all of St. Jude’s lawn work.

“We are constantly looking for ways to engage people,” he said. “We don’t want those gifts to sit on the shelf.”