Geneseo Civil War vets get their just due - Catholic Courier 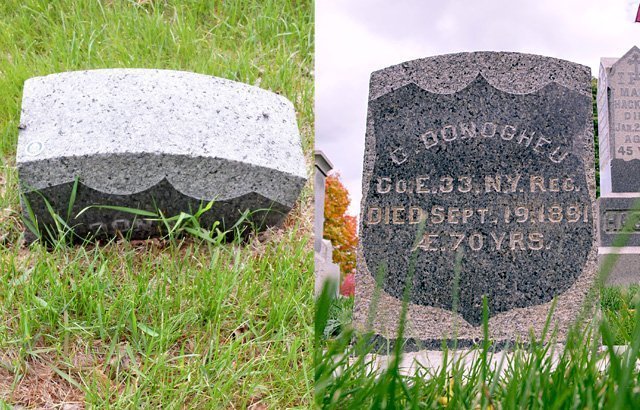 A project to restore Civil War veterans’ graves at St. Mary’s Cemetery in Geneseo was recently completed. Above, one of the monuments is shown before (from left) and after restoration.

GENESEO – Three years ago, while conducting a tour of St. Mary’s Cemetery during an All Souls Day remembrance, folks from St. Luke the Evangelist Parish made a profound discovery.

A number of Civil War veterans — more than anybody had realized — were buried at the cemetery.

Yet determining the exact amount proved a daunting task, because no comprehensive listing was available for the soldiers and many of their monuments were in disrepair.

"I was thinking, ‘That’s not right, they still need to be honored,’" Brian Lawrence said.

So Lawrence — whose wife, Rebecca, serves as cemetery manager — launched a project that recently concluded with the repair of several monuments and special flag holders being added to all the Civil War veterans’ graves.

The initiative’s first steps were to determine how many veterans of that war are buried at St. Mary’s Cemetery, and then to identify their locations. Parishioners Jim and Anita Whitehead culled biographical detail from available records and found that 22 men who served in America’s bloodiest conflict are buried somewhere at St. Mary’s Cemetery on Crossett Road. From there, the Lawrences scoured the original section of the cemetery — which opened in 1873, eight years after the war ended — in an effort to find the graves.

"It was literally going row by row, section by section," Brian Lawrence said.

Government-issued Civil War monuments are distinctly marked with large engraved shields. However, many at St. Mary’s Cemetery were severely tipped and others had partially sunk into the ground, making identification difficult. Other graves were tough to locate because they were parts of family plots and not marked by any reference to military service.

Despite such obstacles, all but one of the graves were eventually found. Brian Lawrence then sought to have the most severely damaged monuments — seven in all — professionally reset on proper foundations. The cemetery advisory committee approved Lawrence’s proposal, provided that he raise the repair money first.

Lawrence responded by organizing a Civil War Era fundraising dinner in October 2015 with a theme of "Lest We Forget." It drew a large response, with nearly 100 people from various faith communities and of all ages coming to the parish center of Geneseo’s St. Mary Church. With an estimated repair cost of $1,200 for the veterans’ graves, the dinner pulled in three times that amount with surplus proceeds going into the cemetery’s general maintenance fund.

A highlight for many at the banquet, Rebecca Lawrence said, was the roll call of Civil War veterans.

"There was such respect and reverence," she remarked, saying she reflected during that moment how this is the Year of Mercy and one of the spiritual works of mercy is to pray for the living and dead.

With funding firmly in place thanks to the dinner’s success, professionals quickly set to work resetting monuments. Work was originally projected to be completed this past spring, but due to a mild autumn it was wrapped up by last November.

This past July 23, the project’s final segment was completed as GAR (Grand Army of the Republic) flag holders were placed at each of 21 veterans’ graves to commemorate the men’s service as Union soldiers. The Lawrences noted that Darin Everdyke, who donated half of the flag holders’ cost and helped dig holes for the holders, was among numerous people who played vital roles in the project’s success.

Rebecca Lawrence said that Civil War veterans can now be properly included each Memorial Day when local veteran and Scouting groups place flags at veterans’ graves in local cemeteries; before, they were routinely missed. The Civil War graves also will be more visible for the All Souls Day remembrance at St. Mary’s Cemetery on Sunday, Nov. 6 — five days before Veterans Day — beginning at 4 p.m. and concluding with a candlelight ceremony.

Whereas their recent focus was on a war fought more than 150 years ago, the Lawrences said it’s important to honor all men who have ever logged service in the United States military.

"Without them, we wouldn’t be where we are today," Brian Lawrence remarked.