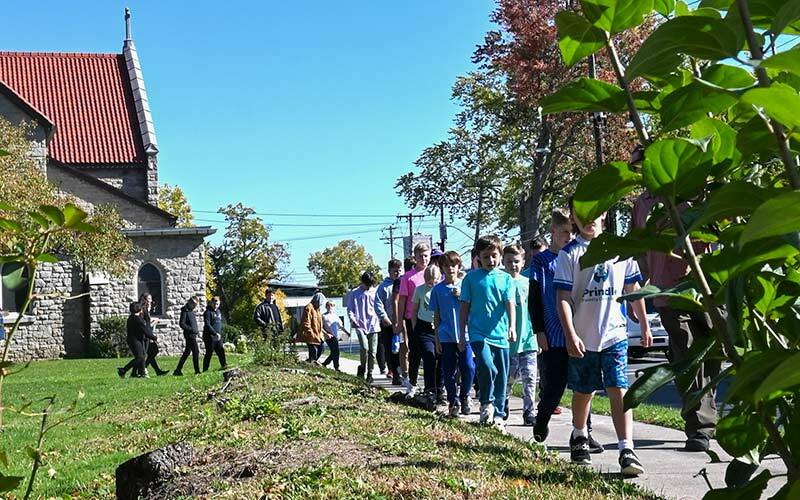 St. Francis-St. Stephen School’s Sixth-Annual Fun Walk took place Oct. 21, and the event more than lived up to its name.

“The kids had a blast,” remarked Suzanne Pohorence, principal at the Geneva school.

Students in preschool through second grade walked laps around the school building as well as St. Stephen Church next door to the school. Students in the third through eighth grades walked around the block surrounding the school on Elmwood Avenue.

Not only is the walk a major fundraiser for the school, but it also provides a way for the school community to engage with the broader Geneva community, Pohorence said.

“It’s just a great fundraiser and community opportunity,” she remarked. “We’re just really excited to be a part of the Geneva community and to highlight what we’re doing.”

The community supported St. Francis-St. Stephen’s students and their Fun Walk in a wide variety of ways both big and small, she noted. Many people who live in the neighborhood around the school came outside to cheer for the students as they walked, and the members of nearby Hobart College’s football team were among the most vocal of those cheerleaders, Pohorence said.

“They wrote positive messages on the sidewalk. They joined in and played with the kids at recess,” she added.

Many parents, grandparents and other family members also came to the school Oct. 21, some to walk with students and others to cheer them on from the sidelines. Several alumni also returned to their alma mater to show support for St. Francis-St. Stephen’s current students.

After finishing their walk, the students munched on apples donated by Geneva-based Red Jacket Orchards and enjoyed popcorn and water brought in by faculty and parent volunteers.

In the weeks leading up to the walk, St. Francis-St. Stephen students solicited pledges from family members and friends, as each student had a fundraising goal of $150. Most students met that goal, and some even exceeded it, Pohorence said. Pledges continued to roll in the week after the walk, and by Oct. 24, the total amount raised stood at $12,676, she said, noting that those funds would be used to fund technology upgrades, classroom supplies, field trips and updates to the school’s playground.

Fundraisers like the Fun Walk are vital for successful Catholic schools, Pohorence said. Unlike public schools, Catholic schools can’t necessarily count on having a certain number of students enrolled or receiving a set amount of funding, she said.

“We don’t have money coming in for guaranteed capital improvements based on voting,” she said. “We don’t have that luxury. We have to charge parents tuition, and we don’t want to increase tuition, so that’s why our fundraisers are very important. Our goal is always to keep the tuition affordable.”

In order to accomplish that, St. Francis-St. Stephen School’s fundraising goal for the 2022-23 school year is $61,000. Several fundraisers have been scheduled for later in the academic year, and several other fundraisers are ongoing. In November, for example, the school will partner with Finger Lakes Coffee Roasters for a sale of the locally produced products. These products also will be offered for sale at the parent-teacher organization’s Holiday Shopping Extravaganza, which will take place Nov. 12 from 9 a.m. until 2 p.m. in the gym of the former DeSales High School, located at 90 Pulteney Street in Geneva.

“In December, we have five businesses who are going to participate in a downtown holiday shopping event, where they donate 1o to 20 percent of their sales on a specific day back to the school,” Pohorence said.

Hobart and William Smith Colleges also has been partnering regularly with St. Francis-St. Stephen School, although not necessarily for fundraising events, Pohorence said. The colleges’ Center for Community Engagement and Service Learning has been sending students over to St. Francis-St. Stephen to read with students through the America Reads program, and in August sent volunteers to help prepare the school building for the start of another academic year. More initiatives are in the works, Pohorence added.

“We can’t wait to see the outcome of those partnerships, and we hope it will be very fruitful,” she said.

Tags: Catholic Schools, Ontario County News
Copyright © 2022 Catholic Courier, Inc. All rights reserved. Linking is encouraged, but republishing or redistributing, including by framing or similar means, without the publisher's prior written permission is prohibited.