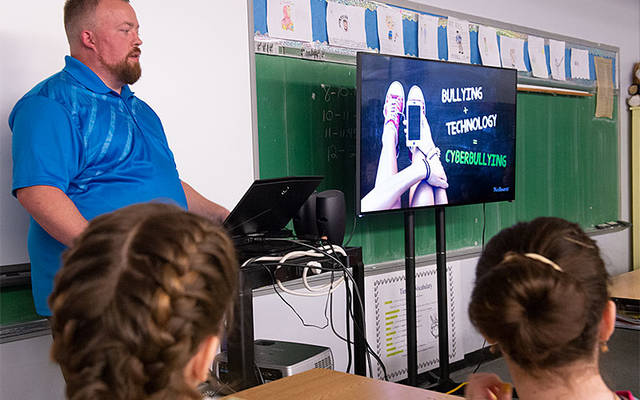 “That was really fun,” remarked sixth-grader Bella Humphrey. “You get a lot of exercise from it, and you can also walk around with friends. It’s really fun to do.”

“They were just cheering each other on. It was really cute,” Williams said.

Fourth-grader Ava Sweeney said she and her classmates worked together with their third-grade buddies to create purple T-shirts to wear during the fun walk.

“It said Be Nicer on the back, and then it had all of our handprints on the front,” Ava said.

Many of the football players from nearby Hobart and William Smith Colleges showed up at the school in uniform to cheer the students on, so even St. Francis-St. Stephen’s older students had role models to look up to,Williams said.

“Everybody had somebody older to be a good example,” she said. “The football players were there to high-five them (the students) when they finished a lap, and some of them walked along. The students had punch cards for each lap, and the Hobart kids checked their laps off. They had a little celebration for each lap.”

Quite a few parents and grandparents attended the walk as well, and some walked with the students while others handed out popcorn and snacks or cheered the students on from the sidelines.

“It was so wonderful to have all those generations in one place. That was fun to see,” Williams recalled.

“It was fun just because there was an adult at every corner, and they would give you high fives,” Bella added.

Earlier in the day, students in the school’s third through eighth grades had learned about the importance of Internet safety and ways to prevent cyberbullying. Eric Bielski, information security manager for Rochester Regional Health Information Organization, gave a presentation geared toward students in the third, fourth and fifth grades as well as one tailored to the needs and concerns of students in the sixth, seventh and eighth grades, Williams said.

“They enjoyed it. It was really mostly about how it’s not right to be cruel to others purposely online,” Williams said.

Kids often don’t think about the ramifications of posting information online, so Bielski’s presentation served as a reminder to them to think before sharing information, Williams said. Bielski also told them what they should do if they ever find themselves the victims of cyberbullying.

“Whatever you put online can never really be erased,” she said. “I knew (cyberbullying) could be harmful, but I learned a lot of things, like how you could hurt someone even more than the person doing the bullying would even imagine. What you say or put online can really affect someone.”

After attending the cyberbullying presentations, the student body enjoyed a pizza party and received new water bottles emblazoned with the words Be Nicer.

The whole day was a hit with students, Ava said.

“It’s just fun to do with friends,” she added.