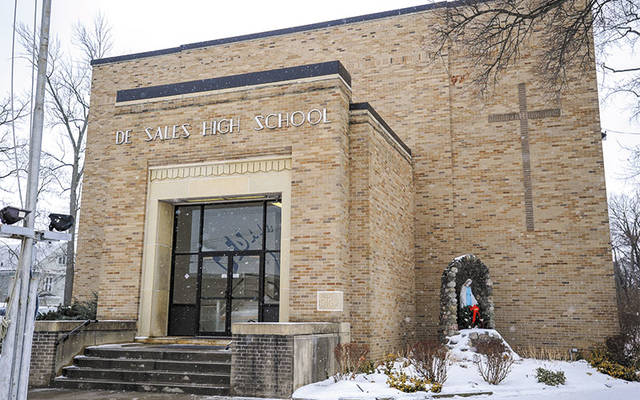 The DeSales High School building in Geneva was recently sold and will be converted into housing. (File photo)

The Geneva building that housed DeSales High School for an entire century is about to get a new lease on life.

Nicholas Massa, president and chief executive officer of Massa Construction, purchased the former school building from Our Lady of Peace Parish in October and plans to convert it into housing.

“It’s a new era for the building,” Father Thomas Mull, pastor of Our Lady of Peace, told the Catholic Courier in November.

Father Mull is a 1967 graduate of DeSales High School, which closed after the completion of the 2011-12 school year. Upon the school’s closure, Our Lady of Peace assumed both control of the property at 90 Pulteney St. as well as responsibility for the costs of maintaining the property. Those costs, which included insurance, utilities, boiler maintenance, snow removal and lawn care, totalled nearly $80,000 a year, Father Mull said.

The parish leased the school building to Finger Lakes Community College for the first few years after DeSales closed, which helped offset the expenses associated with the building’s maintenance, but the college stopped leasing the building in 2016. The parish was unable to find any more tenants, Father Mull said. Elementary and middle-school students from the parish’s St. Francis-St. Stephen School continued to use DeSales’ gymnasium for physical-education classes and CYO basketball games, but the rest of the building has been empty since 2016.

“We were paying close to $80,000 a year to maintain that building that had practically nothing in it but the gym. There was just the realization that we weren’t going to be able to keep it and maintain it,” Father Mull remarked.

The parish began to look into selling the building about two years ago. Massa expressed an interest in purchasing the building and converting it into housing. Father Mull said this prospect was appealing for several reasons, one of which was the fact that Massa was one of Father Mull’s classmates at DeSales, which was somewhat comforting.

“We tried to make sure the buyer was going to use it in a suitable way to be next to our church. ‚Ä¶ We really have no control of what’s going to go in it, but at least the buyer has sort of assured us that it’s going to be used in a way that we’ll feel comfortable with them as neighbors,” Father Mull explained.

Massa was interested in the building because of its significant history in the community and his own life, and because it is different from his typical projects, he said.

“Usually I do commercial leases,” he told the Catholic Courier. “I went to school there and I have a soft place on my heart for the school. I thought rather than let it sit, I would go ahead and give it a whirl and make it into housing.”

Massa purchased the building on Oct. 28 for $380,000, according to Father Mull. In its next iteration, the building will house upscale units, most of them two-bedroom, and the property’s new name will incorporate the word “DeSales” in some way in recognition of the school’s long history in the community, he said. Massa also has agreed to lease the school’s gymnasium, which is separate from but connected to the main building, to the parish at no charge so it may continue to be used for CYO games and St. Francis-St. Stephen’s physical-education classes.

The sale of the building was a bittersweet moment for the parish and for Father Mull personally, he said. The sale relieves the parish of a significant financial burden, yet it also brings the era of DeSales High School to a permanent close.

“Like anything, when you have to let go of it — and selling the building is certainly letting go of it — it is a sad thing, but the other side of it is my memory of that is a building that was alive with young kids and it was a building with life in it,” Father Mull said. “For the last six years, except when we had FLCC using it, it was an empty building with black windows, almost like it was dying. Now when we look at it, it’s going to have people living in it. That’s my way of coping with it.”