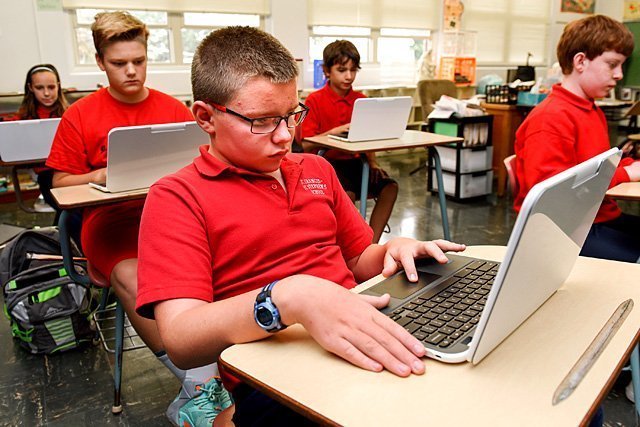 How do you get middle-school students excited about vocabulary exercises, lab reports and math quizzes?

Tell them they can complete the aforementioned schoolwork on their very own laptops, and during school hours, no less.

At least, that’s what teachers, parents and students at St. Francis-St. Stephen School in Geneva recently discovered. In September each student in the school’s sixth, seventh and eighth grades received his or her own Chromebook, which is a type of laptop that runs on Google’s Chrome operating system. At this point the students only use the Chromebooks in school, but eventually they’ll be allowed to take the laptops home and use them to complete their homework, according to Mary Mantelli, principal of St. Francis-St. Stephen School.

"You aren’t going to be able to go out into the world of higher education or a career and not have 21st-century skills in this day and age," Mantelli said. "This is a great way for students to be learning to use (technology) responsibly and develop their skills."

Mantelli learned last spring that the school had been awarded a grant from the Wyckoff Family Foundation, and this grant provided the seed money for the Chromebook initiative. These funds were used to rewire the school building over the summer in order to enhance its wireless Internet capacity and to purchase the Chromebooks for this year’s sixth-, seventh- and eighth-graders, Mantelli said. The students’ families will pay "rent-to-own" technology fees each year that the children are in middle school at the Geneva school, and upon graduation from St. Francis-St. Stephen the Chromebooks will be theirs to keep. The fees they paid will be used to purchase the next batch of Chromebooks for incoming middle-school students.

The school’s middle-school teachers worked throughout the summer to find ways to integrate the Chromebooks into their lessons, Mantelli added. Students use their Chromebooks for warm-up exercises in Spanish class, quizzes in math class, lab reports in science class and PowerPoint presentations in other classes. Several teachers have put together WebQuests, which are documents containing questions on specific subjects as well as links to a variety of websites that contain information students may use to help them answer the questions.

Such exercises not only help students learn about the subjects covered by the WebQuests, but they also teach students how to search for information on the Internet, according to Pam Kehoe, who teaches religion and Spanish at St. Francis-St. Stephen. Kehoe said she has used the Chromebooks to help her expose her students to a number of high-quality Catholic websites with accurate and reliable information.

"They have to learn to use the Internet well. There’s so much stuff out there for them to choose from. You want them to be able to choose discriminately and well. I think that’s a great life skill," Kehoe said.

Kehoe has found the Chromebooks also help facilitate classroom discussions. Using Google Classroom, which is a platform that incorporates various Google apps used on the Chromebooks, she is able to put a question out to all of her students, who then type their answers on their laptops. Once a student has answered the question, he or she can see the rest of the students’ answers, and when everyone has answered the question, Kehoe will ask the students to discuss the question out loud. Using the Chromebooks gives all of the students — and especially the quieter ones — an adequate opportunity to both put together their own thoughtful responses and see what their peers think, Kehoe said.

"I think it’s maximizing class time," she added, noting that the Chromebooks have proven to be a "versatile tool."

"I know it’s probably a honeymoon period, but I feel like I can get them to do more using them," she remarked.

When the students are working on assignments in Google Docs she can see what they’re doing in real time, Kehoe said. The Chromebooks also have been equipped with a program called Go Guardian, which allows administrators and teachers to monitor how students are using their devices, Mantelli noted. The school also plans to invite parents of middle-school students to come in for an evening educational program about the benefits and risks associated with Internet use and the precautions the school has put in place, she said. During this event, parents and students will sign an acceptable-use policy, and students then will be allowed to take their Chromebooks home, Mantelli said.

Lisa Pietrocarlo said she was excited when she found out over the summer that her son, Gavin, would be receiving a Chromebook to use in school and at home. Gavin, a sixth-grader, said he enjoys using his Chromebook so far and thinks the laptop will make doing homework more fun. Classmate Emily Gravitte said she thinks having access to the Chromebooks has helped her better understand the things she learns about in school, like various time periods in history.

"You can watch videos and clips to understand what it was like," Emily said.

"It’s pretty cool to be using technology because that’s probably what we’re going to be using in the future," noted eighth-grader Madison Cirencione.