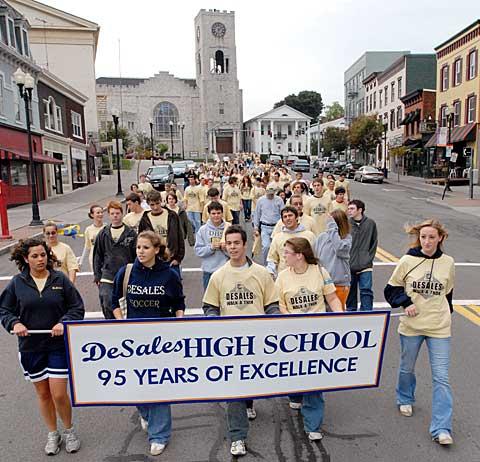 DeSales High School in Geneva will reopen in the fall, according to Principal Gerald Macaluso.

The school had amassed a $450,000 deficit by the end of the 2009-10 school year, and school officials were not certain DeSales would be able to open its doors for the 2010-11 school year. In late spring DeSales launched its Save Our School campaign with the goal of raising $450,000 by the end of July in order to secure the school’s future. Campaign volunteers solicited contributions from alumni and other donors and held such fundraisers as a raffle and a phone-a-thon. In the meantime school officials worked to secure continued grant funding, especially from the McGowan Charitable Foundation for DeSales’ 21st Century Learning Partnership, which allows students to obtain DeSales scholarships and gain work experience and job skills

As of Aug. 3, these efforts had raised approximately $372,000, Macaluso told the Catholic Courier.

"Basically we still have a deficit of approximately $78,000 from the $450,000, and that is pretty impressive," Macaluso said. "We feel even though we had initially said we wanted everything to be in place before we opened our doors, we believe the deficit, as well as normal fundraising activities, are manageable."

Macaluso met with DeSales’ trustees Aug. 2, and that evening the group decided the school would remain open.

"We’re very excited about it," Macaluso said. "Obviously now the hard work begins to continue the initiative and expand it."

Macaluso said the school will continue to hold typical fundraising activities such as music shows, spaghetti dinners and raffles such as the one that was part of the Save Our School campaign.

"They sound trivial, but quite frankly all that added up to big money," he remarked.

DeSales also will actively solicit sponsors for the scholarship component of its 21st Century Learning Partnership. One of the grant’s requirements stipulates that the grant money may be used to fund half of a scholarship’s value, and the other half must be paid for by a sponsor, Macaluso said. DeSales’ staff and volunteers also will be meeting with local businesses to spread the word about the school’s viability and ask these businesses to partner with DeSales through grants and contributions.

"(The school) is preparing positive community representatives for tomorrow’s leadership, and we want them (local businesses) to be part of that," Macaluso said.

DeSales’ alumni became very involved in the Save Our School campaign this summer, and Macaluso said he hopes that involvement will continue.

"We are reassessing the ways we can more actively engage our alumni, not just financially, but also to allow them to know that they are still part of DeSales High School, and we are still carrying the torch, the message, that they were a part of," Macaluso said.

Macaluso said he’d been hearing plenty of positive feedback the morning of Aug. 3 from parents, staff and others associated with DeSales. They’re all very pleased the school will reopen next month, he said, but yet they know there’s still much work to be done.

"It’s just the first part of a journey," he said.