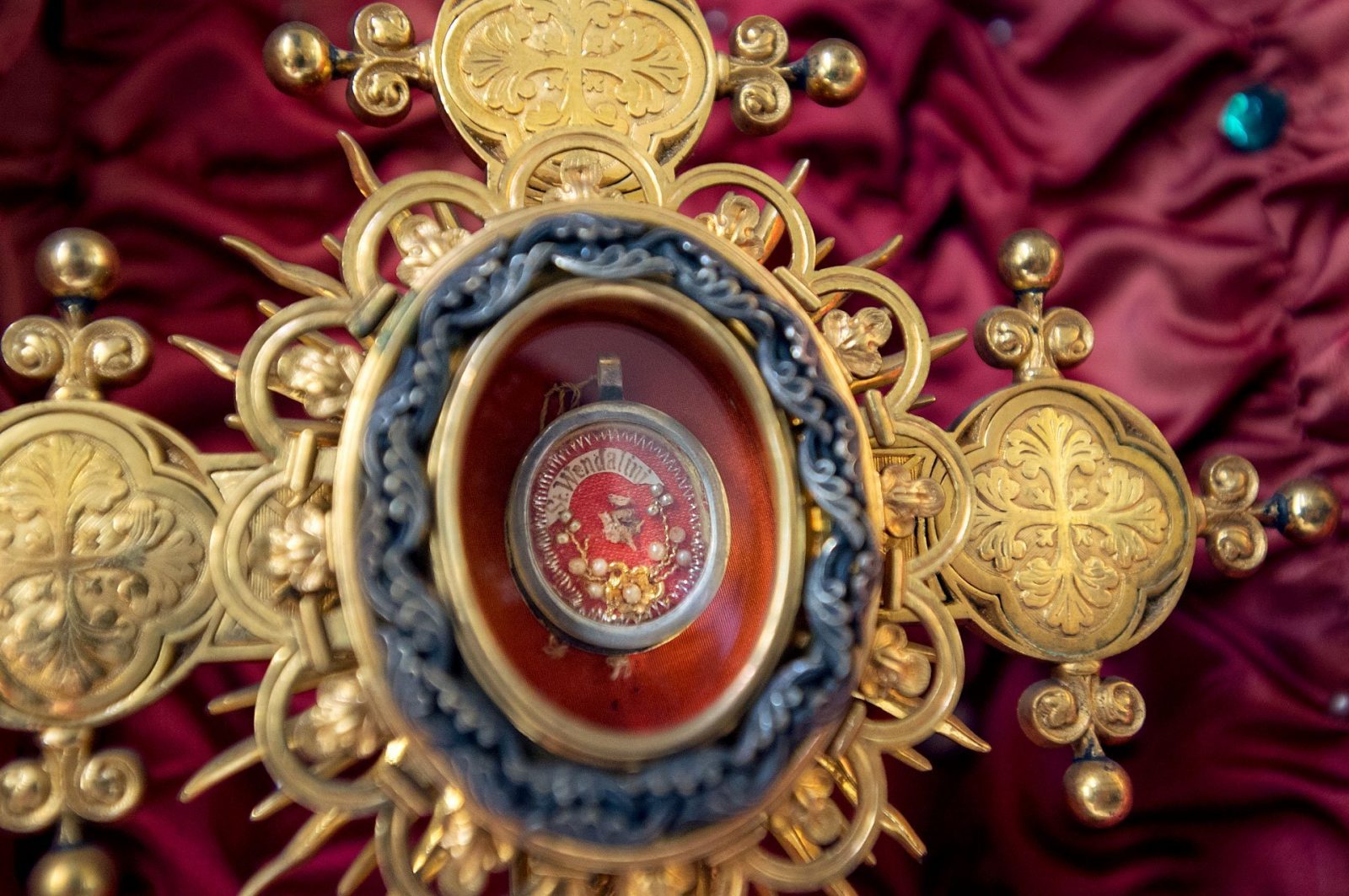 A German film crew visited the hamlet of Perkinsville in March to document the relic of St. Wendelin that is housed at Sacred Heart Church.

It’s not every day that a movie company — all the way from Germany, no less — passes through the quiet hamlet of Perkinsville.

So, when a crew descended upon Sacred Heart Church one Friday morning this past March, a bunch of parishioners showed up to check out the spectacle.

“It was quite an event,” remarked Sally Higginbotham, who, with her husband, Bud, were among the onlookers that day.

The filmmakers were in town to record a segment of a documentary — due out later this year — about St. Wendelin (554-617), a renowned German hermit and abbot. Sacred Heart, which was founded by farming families originating from Germany, is considered vital to the project because it’s among only a handful of churches in the United States that houses a relic of St. Wendelin.

Wendelin is the patron saint of country people and herdsmen. He organized a group of hermits in rural Germany in the late sixth century, and his popularity grew following his death due to miracles that were attributed to him. A basilica was built in his honor, and the town near where he died was renamed Sankt Wendel.

In the 19th century, many Catholics relocated to northern Steuben County from the Diocese of Trier, where St. Wendelin resided. Perkinsville’s first Catholic church, Church of the Annunciation of the Blessed Virgin Mary, was built in 1850. A larger facility was dedicated in 1884 and named Sacred Heart of Jesus, and that same structure is still in use today. In 1897, as a permanent mark of the immigrants’ allegiance to St. Wendelin, Sacred Heart Church obtained a fragment of the saint’s bone from the Trier Diocese. The relic, located in the church’s left altar (there are three altars altogether), is kept inside a clear container inserted into a crucifix.

This key connection to St. Wendelin enticed a German film company, Carpe Diem, to travel to Perkinsville as part of a tour of communities in the United States and other countries that have strong ties to St. Wendelin. The film the company is making strives to highlight “the impact that this saint plays throughout the world,” said Laurie Baverstock, business manager for Holy Family Catholic Community, of which Sacred Heart Church is a part.

On March 10, the film crew was greeted at Sacred Heart by Father Stephen Karani, pastor of Holy Family; Father Michael Twardzik, parochial vicar; and several local residents who had been asked to attend — “anyone with family ties and a long history in Perkinsville,” Sally Higginbotham noted.

“The film crew was very open and receptive to talking to people, and was very interested in the names of some of the families that had belonged there,” Baverstock said, noting that several of Sacred Heart’s early families — including her own — still have members living in the area. Baverstock is a descendant of Nicholas and Elizabeth Morsch, who sold the land on which Annunciation Church was built nearly 170 years ago. Meanwhile, the Higginbothams were interviewed by the film crew, since Sally has ancestors from the Malter and Gunther families who go back three generations each in the Perkinsville area.

The documentary on St. Wendelin is due to be released this October, near the time of his feast day of Oct. 22 and coinciding with the 1,400th anniversary of his death. The Higginbothams plan to make a pilgrimage to Sankt Wendel to view one of the film’s first screenings and take part in other activities dedicated to St. Wendelin. Sally Higginbotham noted that following her return home from Germany, she plans to arrange a parish viewing of the documentary for fellow Holy Family parishioners.
All the attention surrounding the film, she added, has given her a new appreciation for Sacred Heart Church, St. Wendelin and the German homeland where previous generations of her family lived.

“I told the film crew I feel like the connection has now come full circle,” she remarked.