Get Him to the Greek - Catholic Courier 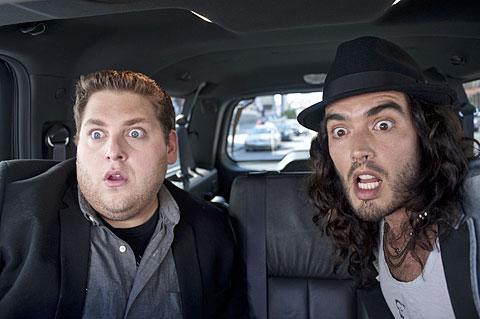 NEW YORK (CNS) — Like his 2008 debut, "Forgetting Sarah Marshall," writer-director Nicholas Stoller’s new comedy "Get Him to the Greek" (Universal) — the raucous, frequently coarse tale of an unlikely friendship — features a few touching moments and some positive underlying values. But, as in the earlier outing, these elements are ultimately eclipsed, in this case by a combination of obscenity-laden dialogue and debauched, sometimes perverse behavior.

Returning from the former film is the character of hedonistic British rock star Aldous Snow (Russell Brand), whose attempts to lead a clean and sober life are scuttled, as we witness in the opening scenes, by a breakup with girlfriend Jackie Q (Rose Byrne) — a pop star in her own right — and by a disastrously unsuccessful record that leaves his career in freefall.

In a bid to revive Aldous’ popularity, and improve the flagging fortunes of his own company, timid young music executive Aaron Green (Jonah Hill) strikes on the idea of a comeback concert at Los Angeles’ Greek Theater, the site, 10 years previously, of Aldous’ most legendary performance.

Aaron manages to sell his hard-bitten boss, Sergio (Sean Combs), on the concept, but finds himself tasked with escorting the wily, wayward rocker — whom Sergio describes as "the worst person on earth" — from London to the Left Coast, and depositing him safely at the Greek in time for the planned performance. To make matters worse, on the eve of his departure, Aaron has a potentially relationship-shredding quarrel with his live-in lover, Daphne (Elisabeth Moss, of "Mad Men" fame).

As Aldous drags Aaron through the depths of his fear-and-loathing lifestyle, and as Aaron encourages Aldous to climb his way back toward sobriety, the ill-matched pair bond.

Stoller’s script manages to wring poignancy from scenes where Aaron insists on treating Aldous as a person rather than a marketable commodity and from the musician’s loving but fraught relationship with his young son, whom he identifies as his only source of happiness. Along with the growing rapport at the heart of the story, Aaron and Daphne’s relationship moves, however indirectly, toward renewed commitment and deepened exclusivity, though there’s no hint of marriage.

But along the way to a moderately acceptable wrap-up, this globe-trotting exercise in excess makes detours portraying casual and group sex, a visit to a strip club, and extensive indulgence in drugs and drunkenness. As is typical for a Judd Apatow production, moreover, there’s hardly a punch line that’s not peppered by the F-word or some other vulgarity.