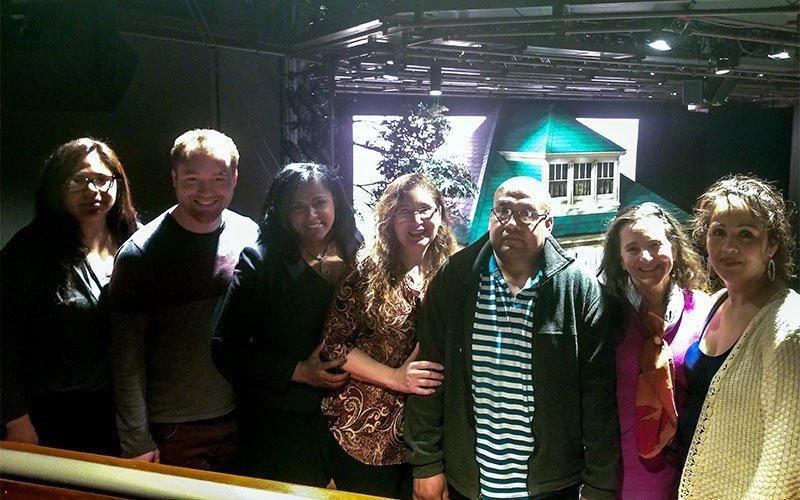 Staff from Oak Orchard Health in Brockport and local farmworkers attended the April 22 production of “One House Over” at Geva Theatre Center.

“One House Over,” onstage now at Rochester’s Geva Theatre, focuses on the story of a couple from Mexico trying to live the American dream.

The main obstacle is both characters arrived in the U.S. illegally — Camila crossed the Rio Grande through a smuggler, while Rafael arrived with his family at age 2.

Camila, a live-in home health aide, is derided by her elderly client for not arriving in the U.S. “the right way.” The two eventually come to an understanding after sharing their personal stories one night.

Meanwhile, Rafael feels locked in by the immigration decision that was made for him when he was a toddler. He dreams of visiting Italy and becoming a chef and is jealous of a coworker’s travel plans.

In addition to immigration, the play offers universal themes about caring for aging parents, what it means to be a good neighbor and what is a diverse neighborhood. It sounds serious, but the themes are treated with humor and empathy.

The daily reality of migrant workers everywhere also is reflected — the constant fear of being exposed, struggles with not being able to drive and jobs dependent on the whims of employers, noted Maria Rubio, who, like Camila, crossed over but now has a work permit. She attended the play April 22 with workers from the Brockport area.

Those same themes play out in the stories I’ve been writing about for years as a staff writer with El Mensajero Cat√≥lico since 2005.

Maria said she closely connected with Camila’s desire to go back to Mexico to care for her ailing father. She hasn’t seen her parents for 16 years and they are not doing well. But she stays because of her three children here.

“We came for a better life — as all immigrants do,” she said.