Ghost in the Shell - Catholic Courier 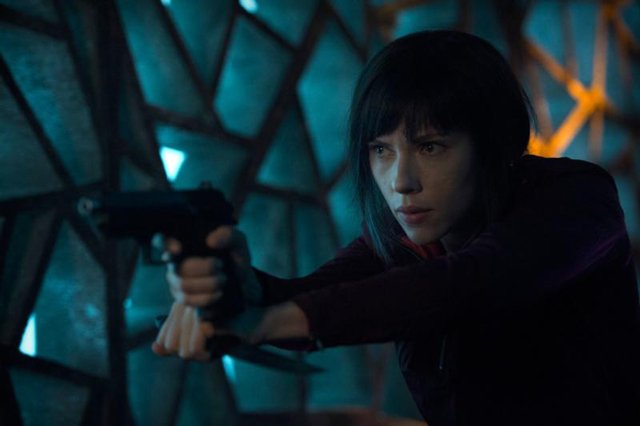 Scarlett Johansson stars in a scene from the movie "Ghost in the Shell." The Catholic News Service classification is A-III -- adults. The Motion Picture Association of America rating is PG-13 -- parents strongly cautioned. Some material may be inappropriate for children under 13.
By John Mulderig
Catholic News Service
NEW YORK (CNS) — "Ghost in the Shell" (Paramount), director Rupert Sanders’ murky, boring adaptation of a series of comics by Masamune Shirow, offers little beyond glitzy futuristic cityscapes. This live-action version of Shirow’s sci-fi-themed manga — first published in 1989 and previously the inspiration for two animated features — is also somewhat exploitative.
Its heroine, Major (Scarlett Johansson), a hybrid warrior whose human brain has been implanted into the body of a robot, has a fondness for fighting in the nude that must have gone down well when the film was being pitched, but puts it off-limits for kids.
The fact that Major’s synthetic skin is something between a patchwork of eggshells and a smoothed over version of Johansson’s physique does tamp
down the voyeurism factor for grown-ups, however. They may be more distracted by the seemingly endless mayhem with which the movie is packed.
Gunplay, explosions and martial arts bravado attend Major’s duel with Kuze (Michael Pitt), an elusive killer who wants to bring down the Hanka Corporation, the company that produced her. She gets backup in her battles from gruff comrade Batou (Pilou Asbaek) and, during her down time, draws emotional support from Dr. Ouelet (Juliette Binoche), the physician who supervised her creation.
The dialogue occasionally explores the nature of humanity under the threat of encroaching technology. But the script gets muddled by its own materialism, identifying the soul (or "ghost"), for instance, exclusively with the brain.
A vaguely sensual get-together with a woman who may or may not be a streetwalker, the flesh of whose face Major enviously examines, might be meant to show us Major’s alienation from her new "shell." On the other hand, since an encounter of a more intimate nature might be surmised to follow the scene, though nothing of the sort is actually depicted, this might be of a piece with Major’s tendency to shimmy out of her clothes.
Screenwriters Jamie Moss, William Wheeler and Ehren Kruger take a stab at an anti-war message by way of the tension between Hanka executive Cutter (Peter Ferdinando), who sees Major strictly as a weapon, and Ouelet, who insists she amounts to more than just a killing machine. The peace theme fails to hit home, though, if only because the tumultuous action consuming most of the run time is so completely at odds with it.
Similarly, the implicit critique of capitalism underlying the friction between profit-driven Cutter and the more responsible figure of Aramaki (Takeshi Kitano), the head of the anti-terrorism squad for which Major works, amounts to no more than a feint. In dealing with all these subjects, Moss and company serve up lines that are meant to sound like pearls of wisdom but land instead like lumps of lead.
The film contains pervasive stylized violence with little gore, torture, a suicide, occasional rear and upper as well as a glimpse of full female nudity in a nonsexual context, at least one use each of crude and crass language, and an obscene gesture. The Catholic News Service classification is A-III — adults.
The Motion Picture Association of America rating is PG-13 — parents strongly cautioned. Some material may be inappropriate for children under 13.
– – –
Mulderig is on the staff of Catholic News Service.
Copyright © 2023 Catholic News Service, Inc. All rights reserved. Linking is encouraged, but republishing or redistributing, including by framing or similar means, without the publisher's prior written permission is prohibited.