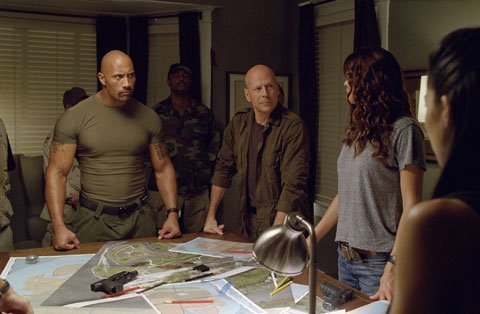 The film picks up where its predecessor, 2009’s "G.I. Joe: The Rise of Cobra," left off. With the help of shape-shifting nanotechnology (think cyborg mosquitoes), the wicked Zartan (Arnold Vosloo) has kidnapped the president (Jonathan Pryce) and assumed his identity. Zartan’s mission is world domination (of course) via a monster space-based weapon, code-named Zeus.

Zartan loves being commander-in-chief. "They say this is a thankless job, but yesterday I got to hang out with Bono," he tells his prisoner. "But my favorite thing is I get to blow things up."

He certainly does. Before long, Zartan is laying waste to much of the Middle East, not to mention central London.

But two obstacles remain in Zartan’s path. Before he can achieve his goal, he must spring his nefarious leader, the Cobra Commander (Luke Bracey), from prison — and eliminate his main opposition, the elite fighting force of G.I. Joes.

The "Joes," captained by Duke (Channing Tatum), are sent into Pakistan to rescue stolen nuclear warheads. But it’s a Zartan-designed trap, and the team is slaughtered. Only three survive: Roadblock (Dwayne Johnson), who assumes command; Lady Jaye (Adrianne Palicki), and Flint (D.J. Cotrona).

To unravel Zartan’s conspiracy and take back the White House, Roadblock and his crew join forces with their ninja counterparts from the Far East. They also seek advice from the "original" G.I. Joe, Gen. Joseph Colton, portrayed by none-other-than — "yippee-ki-yay!" — Bruce Willis.

If all this sounds silly, it is. So it’s just as well that "G.I. Joe: Retaliation" doesn’t take itself too seriously. If there’s any kind of a message to be garnered from the bullet-strewn proceedings, it consists of a timely reminder about the perils of nuclear proliferation and the necessity for international cooperation.

The film contains pervasive action violence, brief gore and a handful of crude and crass terms. The Catholic News Service classification is A-III — adults. The Motion Picture Association of America rating is PG-13 — parents strongly cautioned. Some material may be inappropriate for children under 13.