Gift of baptism is to be cherished, pope says at audience - Catholic Courier 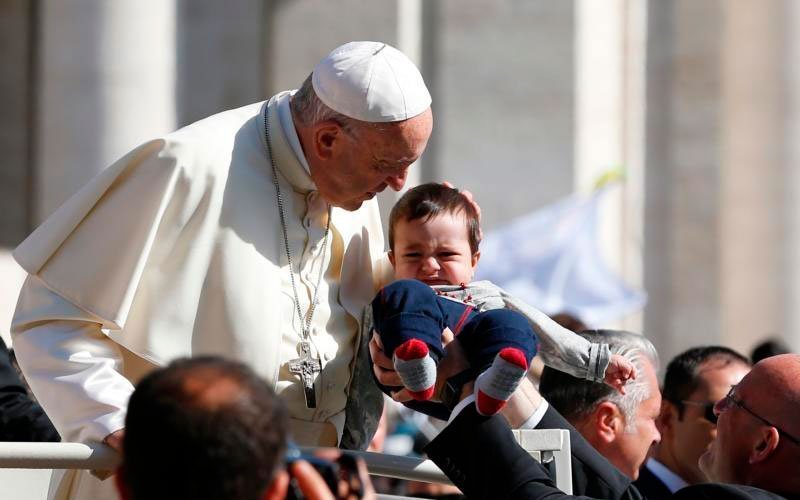 Pope Francis greets a baby during his general audience in St. Peter's Square at the Vatican May 16. (CNS photo by Paul Haring)

VATICAN CITY (CNS) — Children have a right to be brought up in the Christian faith, Pope Francis said.

Parents and godparents must make sure they “feed the flame of baptismal grace in their little ones, helping them persevere in the faith,” the pope said May 16 at his weekly general audience.

“Christian education is a child’s right; it seeks to guide them gradually to know God’s plan in Christ,” so they will be able to personally take up the faith in which they were baptized, he said.

Ending a series of audience talks about baptism, Pope Francis talked about the meaning of the white garment and the lit candle the newly baptized are given during the baptismal rite.

“The white garment, as it symbolically expresses what happens in the sacrament, proclaims the condition of those transfigured in divine glory,” signifying a new life in Christ, he said.

To “put on Christ,” as St. Paul explains in his letter to the Colossians, is to cultivate the virtues of “heartfelt compassion, kindness, humility, gentleness and patience, bearing with one another and forgiving one another … And over all these put on love, that is, the bond of perfection,” the pope said.

Giving the newly baptized a candle lit from the paschal candle represents the risen Christ they have received, he said. It reminds people “that we are not the light, but the light is Christ,” who has conquered the darkness of evil.

“We are called to receive his splendor” and let one’s heart be set on fire, he added.

“The living presence of Christ to safeguard, defend and expand in us is the lamp that lights our footsteps, a light that guides our choices, a flame that warms our hearts in going to encounter the Lord, making us able to help those who journey with us” toward eternity, the pope said.

Pope Francis repeated the same invitation he made in his apostolic exhortation, “Gaudete et Exsultate” (“Rejoice and Be Glad”), asking people to “let the grace of your baptism bear fruit in a path of holiness. Let everything be open to God; turn to him in every situation. Do not be dismayed, for the power of the Holy Spirit enables you to do this, and holiness, in the end, is the fruit of the Holy Spirit in your life.”