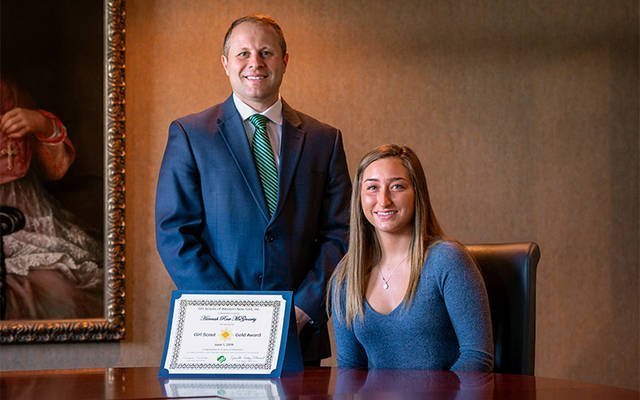 Hannah McGroarty recently earned the Girl Scout Gold Award for her work on a project to start a used-uniform closet at Seton Catholic School in Brighton. Anthony S. Cook III, superintendent of diocesan Catholic schools, was her adviser for the project. (Courier photo by Jeff Witherow)

Hannah McGroarty can barely remember a time when she wasn’t involved with Girl Scouts. McGroarty, now 19, joined the organization as a Daisy when she was just a kindergartner at St. Pius Tenth School in Chili. She made Scouting a priority in her life throughout her years at St. Pius as well as Seton Catholic School in Brighton and Aquinas Institute in Rochester.

Scouting and Catholic education both have been constants in McGroarty’s life, and recently she was honored for her work on a project that brought those two influences together. On June 1, McGroarty received the Gold Award, which is the highest award a Girl Scout can receive, for her work on a project to start a used-uniform closet at Seton Catholic School last winter.

“We took gently used uniforms people weren’t using or had grown out of, and we put them in boxes and organized them by size and everything,” explained McGroarty, who currently is beginning her sophomore year at Rochester Institute of Technology and attends Mass at Sacred Heart Cathedral.

McGroarty put together a fact sheet about the used-uniform closet for teachers to distribute to Seton students and also planned used-uniform drives in order to keep the closet well-stocked.

“I for sure am going to go back and help out (with future drives),” McGroarty told the Catholic Courier.

The impetus for this project came from an awareness of the financial strain that a Catholic education can sometimes place upon a family’s budget, McGroarty said. That strain is compounded when the cost of purchasing new uniforms is factored in, she said.

McGroarty knew some families previously had donated their gently used uniforms to Seton, but those uniforms hadn’t been organized and made easily accessible to current school families. She also knew she and many of her fellow Seton alumni still had some of their own uniforms hanging in their closets.

Making these gently used uniforms available to school families at a discounted price seemed like a good way to utilize uniforms that were still in good condition but not being used, while also relieving the financial burden for some of the school’s families.

When McGroarty began to make plans for the used-uniform closet back in the summer of 2018, she approached Anthony S. Cook III, superintendent of diocesan Catholic schools, and asked him to serve as her adviser for the project. She knew Cook from her years at Seton, where he had served as principal before becoming superintendent in 2013, and he helped connect her with school officials whose permission she’d need in order to start the closet and hold uniform drives.

“In thinking of others first, Hannah was able to develop a project that made used uniforms more easily attainable for a future generation of Catholic-school students,” said Cook, who on Sept. 6 will leave his post as superintendent and become executive director of alumni relations and development at Aquinas, an alma mater he shares with McGroarty. “Hannah is such a driven individual, and it is no surprise that she found success in completing her Gold Award project.”

“I saw her Brownie vest, and I thought it was so cool. I would try it on,” McGroarty recalled. “She definitely encouraged me, and I always wanted to do it.”

Joining the Girl Scouts introduced McGroarty to a wonderful group of girls and helped her gain new skills, she said. McGroarty enjoyed her Girl Scout experience so much that she stuck with it throughout high school, even though it sometimes was hard to make time for troop meetings and activities in a schedule that was already filled with school and sports commitments.

“It’s definitely worth it in the long run,” said McGroarty, who still is involved in some activities with her former troop.

The process of working toward and earning the Gold Award has been one of the highlights of her time in Girl Scouts, she added.

“It definitely feels rewarding,” she said. “I just feel like I’m helping other people. It’s a great experience.”