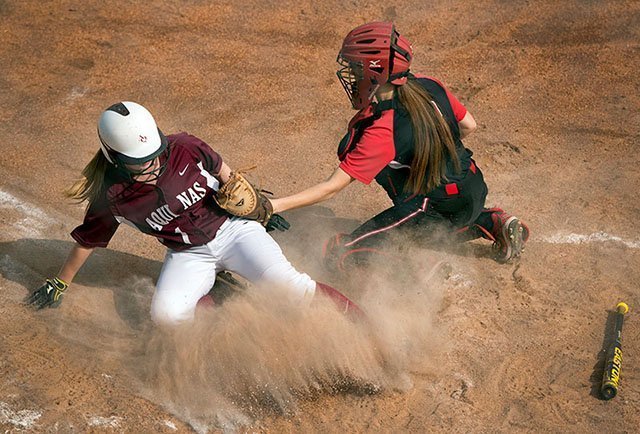 Megan Hildebrand slides safely into home plate to score in the fifth inning of Aquinas Institute's 5-3 loss to Geneva in the Section Five Class A2 championship game May 29 at the State University of New York at Brockport.

A dominating sectional win by Elmira Notre Dame girls’ track, along with runner-up finishes for Notre Dame and Aquinas Institute girls’ softball, topped the list of spring sports highlights for Catholic high schools in the diocese.

The Crusaders cruised to the Section 4 Class C championship on May 22, winning half of the 16 events despite competing against 16 other schools. Notre Dame’s first-place team total of 125 points was more than twice as many as second-place Bainbridge-Guildord/Afton, which had 58.

In the Section 4 state qualifier, held May 29, first-place finishes came from Smithers in the 400 hurdles and Diarra in the 200 dash. Also qualifying for states were the 3,200 and 400 relays, which each placed second; and Diarra, third in the 100 dash.

In the state-championship meet, held June 6-7, the top ND finishers were Smithers, sixth in Division II in the 400 hurdles; and the 400 relay, which placed eighth in Division II.

The Crusaders, seeded No. 2 in Section 4 Class C, began sectionals with a 21-0 quarterfinal romp over No. 7 Groton on May 27 as Alivia Clark pitched a perfect game with 14 strikeouts. Notre Dame then scored a 4-1 semifinal win over No. 3 Union Springs on May 29, as Clark threw a three-hitter and struck out 10 and the offense got all four runs in the third inning.

However, the Crusaders came up short in the Class C final on May 31. Despite holding a 3-0 lead entering the bottom of the fifth, ND surrendered nine runs that inning and suffered a 15-7 loss to top-seeded Thomas A. Edison. Mackenzie Maloney led Notre Dame’s offense by going 4-for-4 and driving in three runs. The Crusaders’ final record was 17-4.

The Little Irish, seeded No. 4 in Section 5 Class A2, started the playoffs with a 10-3 quarterfinal win over No. 5 Honeoye Falls-Lima on May 24. Emily Monachino went 4-for-5 with four runs scored, and Vanessa Parrotta added a two-run homer. That victory was followed by a 9-0 rout of No. 8 Newark in semifinal play on May 27, thanks to a seven-run third inning and a three-hit shutout pitched by Jordan Ott.

In the final against No. 2 Geneva, played May 29, the Little Irish came up on the short end of a 5-3 decision. The key blow was struck in the third inning, as Erin Guinan hit a grand slam home run to erase a 2-1 AQ lead. The Little Irish scored twice in the second inning and once in the fifth. Their final record was 11-7.

* McQuaid Jesuit boys’ golf got a first-place finish from Connor Raeman at the Section 5 Class A team tournament on May 23. Raeman shot a one-under-par 70 at Wild Wood Country Club to earn medalist honors as the Knights placed second in team scoring. Raeman went on to qualify for state play by shooting 77 at Ridgemont Country Club on May 17 and 73 at Oak Hill West on May 22. His 150 total placed him third, with teammate Peyton Steigerwald also making the state team by shooting 79-73 to place fourth at 152. Raeman went on to tie for 16th with a 154 total (77-77) at the state tournament, held June 1-2 at the Cornell University course.

* McQuaid boys’ track finished second among 12 schools at the Section 5 Class AA meet held May 24. Event winners for the Knights were Nate Howe, in the 800 run; Tobi Tella, long jump; the 1,600 relay (David Ingraham, Noah Williams, Atiba McLaren and Howe); and the 3,200 relay (Austin Peters, Matt Brien, Nick Ciolkowski and Howe). More first places followed in the Meet of Champions Division I state qualifier on May 30: Howe, in the 800 run; Tella, long jump; and the 1,600 relay. At the state meet held June 6-7, the top McQuaid finishers were Tella, eighth overall in the long jump; and the 1,600 relay, which placed ninth in Division I.

* Our Lady of Mercy girls’ track finished third out of 12 teams at the Section 5 Class A meet held May 24. Event winners were Kierra Carter, in the shot put; and Emem Ikpot, 400 dash. At the Meet of Champions state qualifier on May 30, Carter took third in the shot put for Division I. She went on to place 15th in that event in Division I at the state meet June 6-7.

* Christine Schmitt of Mercy tied for 16th place at the state girls’ golf tournament June 14-15, where she was the defending champion. Schmitt shot an opening-round 79 at The College Course at Delhi and added a second-day score of 82 for a 161 total, tops among Section 5 golfers. She had qualified for state play by winning her fourth straight Section 5 title last fall.