Giving when you have nothing left to give - Catholic Courier 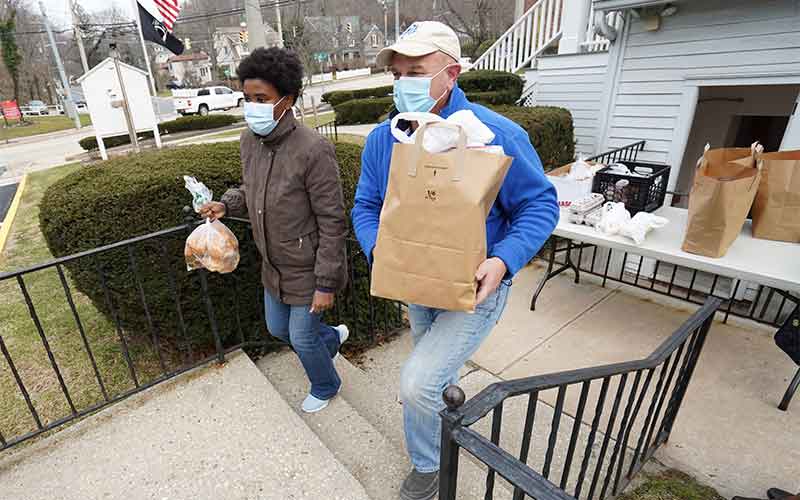 Volunteer Bill Dittrich assists a woman who received provisions at an ecumenical food pantry based at First Presbyterian Church of Northport, N.Y., Jan. 14, 2021. The pantry is sponsored by 12 local houses of worship to serve the needs of people in the Northport and East Northport communities. (CNS photo by Gregory A. Shemitz)

My Lenten search for grace

It’s hard to be generous when you feel like you have nothing left to give.

Have you felt tapped out when trying to follow through on Lenten sacrifices this year or prayed “aren’t we sacrificing enough right now, Lord?” You’re not alone.

The added complexity, price inflation and going through daily life without social support has tempted some to give up on Lenten sacrifices this year.

Living Lent during another year of COVID-19 can feel like juggling medicine balls while someone tells you you’re not juggling enough!

The desire to do more or “enough” during Lent can trick us into thinking that Lent is performative, like a spiritual competition of “American Catholics Got Talent”!

But living the spiritual disciplines of prayer, fasting and almsgiving are not about stepping outside of our daily life but entering more deeply into our prayers, works, joys and sufferings to make “thy kingdom come, thy will be done on earth as it is in heaven.”

Making earth heavenly means incarnating the person of Jesus Christ through our Christian witness. We are baptized into the life of Christ, priest, prophet and king.

The practice of almsgiving is the act of exercising our Christian kingship through Christian kinship. Giving alms unites us to Christ the king who was generous, sacrificing not only his time and possessions, but his very being.

Almsgiving is not simply donating something but donating oneself to Christ through our brothers and sisters. For “whatever you did for one of these least brothers of mine, you did for me” (Mt 25:40).

St. John Chrysostom notes that “almsgiving has to do not only with money, but with all matters also wherein man succours man, as when the physician heals, and the wise man gives counsel.”

In addition to sacrificing our comforts to give money to the poor, Lent during a pandemic elevates the many ways in which we are already giving alms by giving of ourselves and challenges us to give more intentionally.

This Lent, when we feel worn by the responsibility or suffering of daily life, let’s offer that act of service and suffering to God as authentic almsgiving.

I am encouraged by a reflection of Jesuit Father Greg Boyle, founder of Homeboy Industries in Los Angeles. I heard Father Greg speak at a conference several years ago when I was newly working in ministry (and spiritually exhausted).

I asked him after a presentation, “How do you run multiple organizations, speak nationally and still have time to meet with people one on one and to listen to their stories?” Father Greg shared that growing up he would watch old submarine movies where someone would make an announcement over the intercom.

To get people’s attention, he would begin saying, “Now hear this …” Father Greg remarked that those three words stand out to him as a way that God is directing our attention today: Now. Here. This.

Giving alms is not waiting for some time in the future, going somewhere far away or doing something wholly different than our daily lives. The practice of giving alms is available to us now, here and in this Lenten season through the poor that God has placed in our lives.

The work of Lent for many of us is to be attentive to all the ways that God is already presenting himself to us and calling to us. The three disciplines of prayer, fasting and almsgiving allow our minds and bodies to become more aware of our own poverty and more attentive to our reliance on God.

While giving financially to those in need is a moral necessity, this Lent is an opportunity to include financial giving as a part of our offering of our whole self.

I am challenged by the words of C.S. Lewis in “Mere Christianity”:

“I do not believe one can settle how much we ought to give. I am afraid the only safe rule is to give more than we can spare. In other words, if our expenditure on comforts, luxuries, amusements, etc., is up to the standard common among those with the same income as our own, we are probably giving away too little. If our charities do not at all pinch or hamper us, I should say they are too small.”

There is a popular phrase that God “afflicts the comforted and comforts the afflicted.”

If we are feeling worn down by life’s responsibilities this Lent, spend time in prayer reflecting on the ways God is already asking us to give alms to our family, co-workers, neighbors and those in need. If we are feeling comforted, let us follow the advice of C.S. Lewis to “give more than we can spare.”

This Sunday’s Gospel of the prodigal son gives us a model of self-giving through the example of the forgiving father. He didn’t go somewhere far off to give alms but gave generously without ever leaving his home.

His daily gaze to the horizon, longing for his son to return, was an act of prayer, a daily offering of himself that moved him to greater compassion. He gave freely. He gave until it hurt.

(Jonathan Lewis is vice president of customer operations at Catholic Faith Technologies and lives in Washington with his wife and two children.)